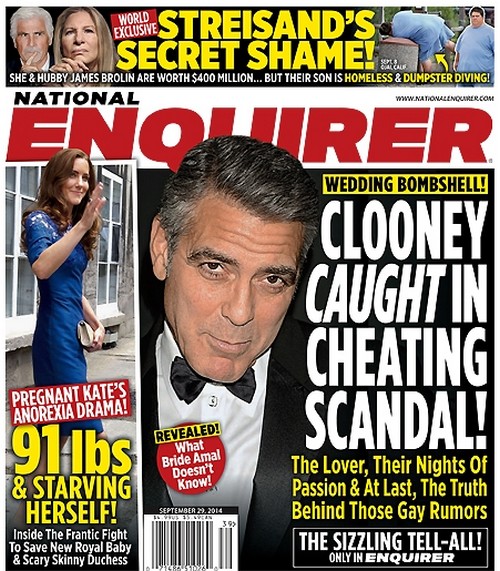 On September 8th the Royal Family confirmed that the Duchess of Cambridge Kate Middleton is indeed pregnant, and she and Prince William are expecting their second baby. The palace’s announcement also revealed that Middleton is suffering from hyperemesis gravidarum, the same morning sickness that landed her in the hospital in 2012 when she was pregnant with Baby George. But, according to the September 29th edition of National Enquirer, morning sickness is the least of Kate Middleton’s health concerns.

The cover of National Enquirer’s newest issue reads, “Pregnant Kate’s Anorexia Drama – 91 Pounds And Starving Herself. Inside The Frantic Fight To Save New Royal Baby & Scary Skinny Duchess.” Rumors have always circulated that Kate Middleton is anorexic, but we’re not exactly buying that she is starving herself to death with the royal heir in her belly. Queen Elizabeth and her team would never allow Kate Middleton to jeopardize the health of one of Prince William’s children, she would take any means possible to make sure Kate is eating properly, and would probably go as far as to have her subdued and force fed a sandwich. As far as weighing 90 pounds, Kate Middleton probably does look a little thin in her skin, after all she suffering from hyperemesis gravidarum.

So, what do you think about the National Enquirer’s report that Kate Middleton anorexic and starving herself and her unborn baby. Would the Royal Family really let her get away with that? And what about George Clooney, once a cheater always a cheater, or will he change his ways for his bride-to-be Amal Allamuddin? Let us know what you think in the comments below!