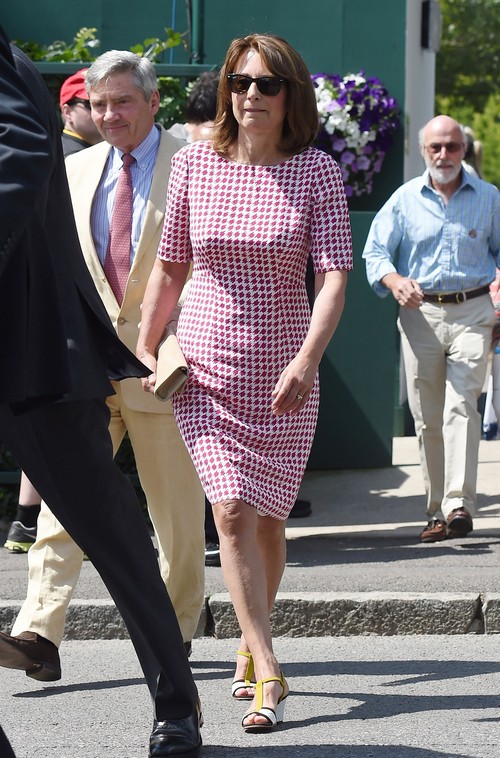 It looks like Carole Middleton thinks she is grander than the Queen – Queen Elizabeth! Kate Middelton’s mother is letting her royal connections get to her head. According to Kate Middleton’s second cousin [who’s also Carole’s goddaughter], Carole has become too big for her britches, ditching her lowly middle class family and refusing to let them meet Prince George.

Joanne Callen gave an extensive interview to the Daily Mail detailing her grievances with Carole, explaining, “Carole doesn’t reply to invitations and doesn’t turn up at any family events. She claims that she won’t go anywhere where Gary [Goldsmith] is but I think she is just making excuses. The real reason is that she is above us now. We’re not in her social circle. It’s as if we are not good enough now and she’s embarrassed by us. She is now even grander than the Queen.”

Gary, as we know, is the Black Sheep of the Middleton family, otherwise known as the ‘fun’ or ‘naughty’ uncle, depending on which side you’re looking from. Carole, now that she’s a ‘royal’, clearly wants to disassociate herself from anything that could bring down her new social standing.

Joanne also claims that Carole had promised her and her parents that they would get a chance to meet Prince George, but that still hasn’t happened. Not only that, but Carole’s kept the most minimal interaction with her family, which has prompted Joanne to say, “At the end of the day, I’m not sure what the word goddaughter means any more.”

Does this really surprise anyone? There have been plenty of reports suggesting that Carole’s ego has been getting out of hand lately, but having a daughter marry into the royal family and birth the heir to the throne would probably do that to most people. Carole, and by extension Kate and Pippa [Middleton], are trying their best to make people forget that they have a middle-class background. You’d think that it wouldn’t matter in this day and age, right? Yeah, not when you’re part of the royal family, apparently.

For what it’s worth, Uncle Gary tweeted against Joanne’s words, writing, “Off to the gym to burn off some frustration!! Inaccurate & mean journalism stinks!”

Is he just sucking up to Carole? Or is he saying that Joanne’s lying? Either way, if Joanne and her parents were waiting for that invitation to come visit George, they can bet that sure as hell isn’t happening now.