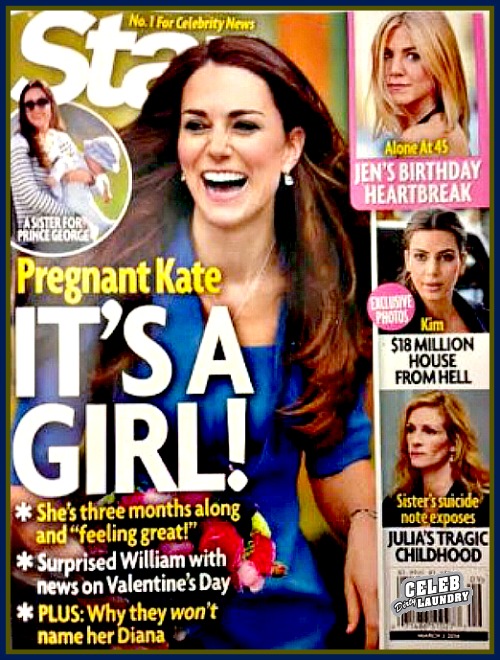 Is Kate Middleton already pregnant again, less than a year after giving birth to her first baby with Prince William? That’s what the latest cover issue of Star Magazine alleges, claiming that Kate’s pregnant with a girl and she’s already three months in. Apparently, she’s already surprised William with the news on Valentine’s Day, and she’s feeling ‘great’, although she’d already been hospitalized at the same point in her pregnancy with Prince George.

Eh, is this believable? If Kate really is pregnant, we’ll definitely be hearing the news from a source other than Star Magazine soon. But you know, it’s possible. Tabloids have sometimes made wild guesses and hit the mark, and they do also get inside info. Many stories that start as rumors in the tabs wind up as hard news a few weeks later.  Maybe Kate’s trying to keep the pregnancy quiet, but she knows that will be hard to do with the press in London. The truth of the matter is that we really can’t say one way or another until she starts showing more.

Star’s cover also has a story on Jennifer Aniston, forever alone. Okay, they don’t say that, but they hint at Jennifer’s never-ending romantic troubles, and how she supposedly spent her 45th birthday alone and away from Justin Theroux. Um, I highly doubt she spent it alone. Just because she didn’t spend it with her fiance doesn’t mean that she doesn’t have other friends and family. But yeah, it’s definitely not a good sign for their relationship.

And of course, Star does touch upon the death of Julia Roberts‘ half-sister, Nancy Motes. It’s obvious that the family has a lot of secrets, and it’s clear Nancy had a lot of unresolved issues dealing with her sister before her suicide – but right now, I think it’s best if Julia gets the privacy she needs to deal with this matter with her family and friends. It’s bad enough that your half-sister commits suicide, but it’s probably made worse by all the rampant press speculation that’s accompanying her death.