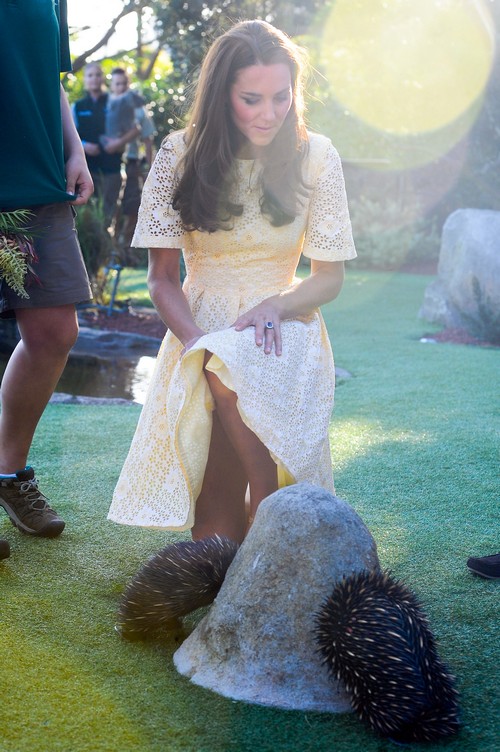 Kate Middleton is about to embark on her first solo tour, without Prince William or Prince George to distract the populace from her naked bum scandals. Let’s just hope that she remembers to weight down her dresses this time, or we’ll never hear the end of Kate’s exhibitionist ways.

According to reports, Kate will embark on her first solo tour this September, probably smack dab in the middle of her second pregnancy. A source told US Weekly, “She’s really nervous but excited about stepping out by herself. The trip will focus on some of the causes that connect with her beliefs and patronages.”

Kensington Palace has yet to confirm the details, probably because they’re worried that Kate’s pregnancy could get in the way of the tour. Kate’s first pregnancy wasn’t easy on her health, and if the same thing happens this time around, I doubt she’ll be in any position to go on international tours.

The tour in September is currently being planned for Malta, where Kate will spend two days to help commemorate the island’s 50 years of independence. Of course, I’m sure that Malta being renowned as a tourist destination has nothing to do with it. No, Kate would never, ever think about beaches and vacationing when she’s ‘working’. Right.

Trust me, the royals take every chance they can get possibly get to squeeze in vacations. I mean, most of their lives seem to be an extended vacation, but I doubt Kate and Will would ever give up a chance to travel to an island for a ‘tour’. The question now is whether Kate will even make that tour, or whether we’re just hearing very early plans for the trip. If Kate does get pregnant, I doubt she would even leave the palace, much less travel to another country on tour.

Update: Kate Middleton’s pregnancy has been confirmed by Jessica Hay, Kate’s supposed dear old friend who was the first to reveal correctly The Duchess of Cambridge’s first pregnancy with Prince George.