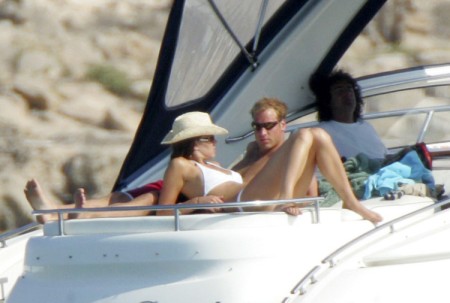 Sometimes, I feel like Kate Middleton and Prince William spend more time on vacation than they do actually ‘working’. I say working with air quotes because what do they do, really? Kate makes maybe one or two public appearances for philanthropy-related causes per month, and Will is currently doing a short course at Cambridge. It’s not like they’re sooo exhausted that they just HAD to take a vacation, especially one without little Prince George.

Anyway, reports are surfacing that both Kate and Will are currently on a week-long vacation in the Maldives, right before the start of their tour in Australia and New Zealand. And for those who think they’re resting up now because they’re going to be exhausted with the tour? Well, the tour’s also only a few weeks long.

Anyway, Will and Kate managed to keep this little trip on the down-low, with the press only figuring out that they were in Maldives when a local newspaper saw them arriving. Can you blame them, though? They know that they’ll get criticized for taking yet another vacation to a fancy foreign location, especially when they barely do any work in the first place.

Either way, they would be right. They’re already getting criticized for taking the vacation, but also because they left Prince George behind. They may have wanted some alone time while the new nanny bonded with George at his grandparents’ house, but leaving an eight-month old home alone because you want to go on vacation? Not flying well with the press or the public.

What do you guys think? Do Kate and Will have a right to go on vacation whenever they please without getting criticized for it? Especially without their baby son? Let us know your thoughts in the comments.