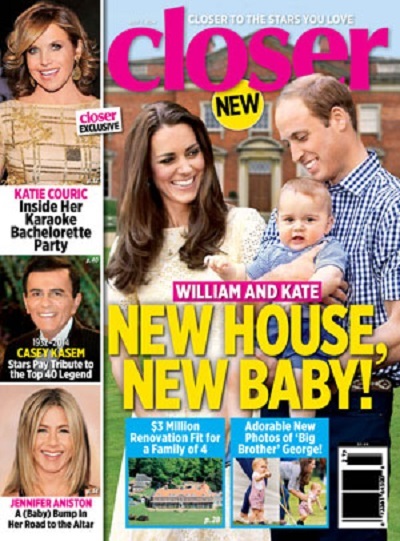 What an exciting time for Kate Middleton. Not only is she gearing up to celebrate Prince George‘s first birthday, but she is also rumored to be expecting baby number two. Then there are those rave reviews that she garnered while spending most of the month of April down under, which prompted Queen Elizabeth to declare Kate ready to wear the crown. The good news doesn’t stop there.

According to the July 7th print edition of Closer Magazine, Kate and Prince William are also preparing to leave London for their newly renovated country home. If you recall, the young couple settled into a spacious apartment in Kensington Palace last fall; however, a life in the country is apparently what Kate wants most for her family.

Now that she has gotten past the morning sickness, Kate is ready to settle her expanding family in an area surrounded by nature. Rumor has it she and William have also discussed home schooling their kids!

Will Jennifer Aniston and Justin Theroux ever tie the knot? The couple turned up at the premiere of his new HBO series The Leftovers in NYC earlier this week and it was their first public appearance together in 9 months. According to Closer, the actress may finally be pregnant, but that doesn’t necessarily mean that a wedding is in the works. In fact, we have heard that Justin has put the brakes on getting married all together.

Also in the July 7th print edition of Closer, Hollywood pays tribute to the late Casey Kasem. You’ll want to grab a copy, but in the meantime, do you think that Justin and Jen will ever make it down the aisle? Tell us your thoughts in the comments below!