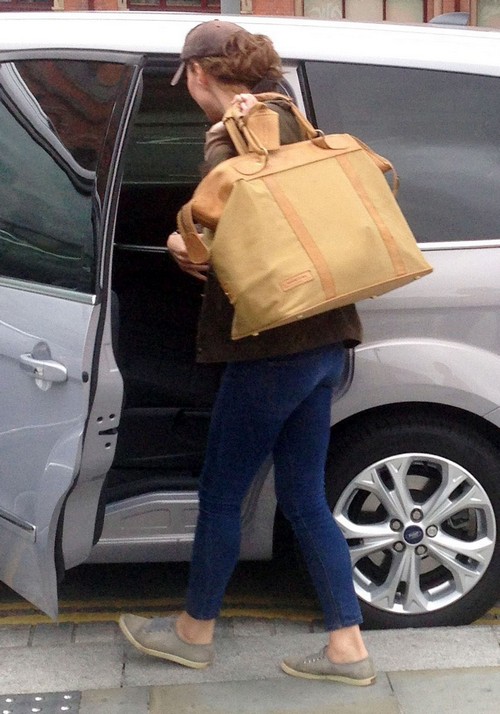 Prince William and pregnant Kate Middleton went undercover in London this weekend, only 10 weeks after Princess Kate’s rumored miscarriage – going incognito in casual wear and caps to take public transportation in London. The couple [with their dog Lupo] boarded a busy train, although Prince George was noticeably missing from Kate’s arms.

This, of course, has led to a firestorm of speculation – why were Kate Middleton and Prince William taking public transportation? Who were they trying to hide from, and why? Was Kate Middleton trying to hide her second child baby bump from curious paparazzi? Where was George? Why was Lupo with them?

We can come up with numerous theories for this, with most people suggesting Kate’s pregnancy as the reason behind their undercover tactics. However, if Kate was pregnant, take public transportation seems counter-intuitive. Wouldn’t more people see her on a train than in a chauffeured car?

One theory is that Kate is pregnant only 10 weeks after her miscarriage was reported by GLOBE and she is treading very carefully with her ‘miracle baby.’ Now how this fits into being spotted at Kings Cross Station with royal security, Prince William and her dog we can’t quite figure out!

Or perhaps Kate and Will were headed somewhere they didn’t want the rest of their family to know, and they figured this was the best way to do it. George not being there makes sense if they were trying to hide, since holding the toddler royal baby is akin to screaming ‘Here we are!’. Lupo, on the other hand, is far less recognizable, although it’s still not clear why they would take Lupo with them if they were trying to hide. Perhaps they were walking him somewhere, and then realized they were being chased by paparazzi? And then assumed that the train was the best way to lose them? Eh…

Man, I don’t get the royals – their thought processes can be so convoluted sometimes [see: their refusal to confirm or deny Kate’s pregnancy and her miscarriage]. If we have to go with a reason, the only thing that makes sense is that Kate and Will were trying to hide something and/or trying to hide from someone. They have been staying out of the limelight more often than not lately, but it’s also possible that they did this as a PR stunt – ‘look at how relatable we are, taking public transport!’ They know their image has been pretty bad lately, with the public grumbling about how they are AGAIN going on vacation. Plus, they are moving to Anmer Hall pretty soon, and public appearances will be few and far between [not that they make that many as it is]. It’s possible that they planned the train trip as something to get them noticed, and get them some positive buzz before they disappear off to their bi-weekly breaks.