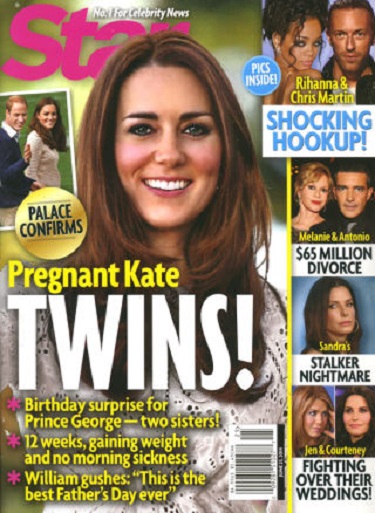 It seems like Kate Middleton is always pregnant — at least if we listen to all of the rumors! However, this time around, it does seem to be quite possible that the duchess is indeed expecting another baby, or perhaps two. CDL first told you about a month ago that sources told us Kate was indeed pregnant and was experiencing morning sickness that ultimately caused her to sit out most of the month of May. Now, according to the June 23rd print edition of Star Magazine, she is past the worst of it and feeling great at about 12 weeks pregnant. Their sources say that the palace is inching towards an official announcement and that it might just be a set of twins.

Prince William has spent the last year doting on Prince George and loving fatherhood, so learning that he is going to have a second child is the best Father’s Day gift he could ever ask for. While Kate and William are quite obviously loving their life together, we learned last week that Melanie Griffith and Antonio Banderas were over and done with. Now, the once super steamy lovebirds are gearing up for a $65 million divorce and it is expected to get a bit messy.

According to the new issue of Star magazine, Jennifer Aniston and Courteney Cox are battling over the planning of their upcoming weddings. Here’s the thing though…Jen and Justin Theroux have been engaged for years now. Does anyone actually believe that it’s a wedding that will ever really happen?