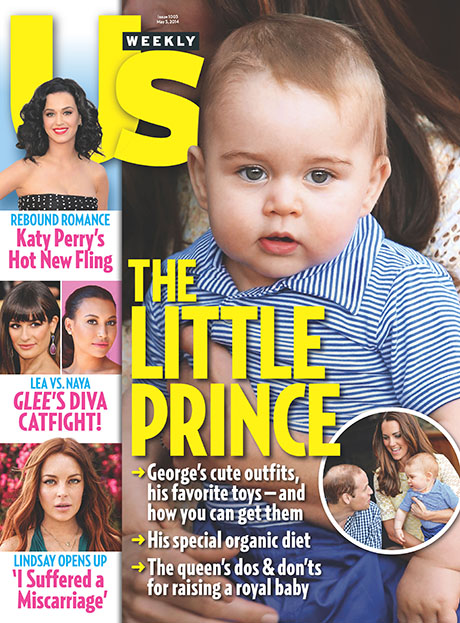 Over the last two weeks, the world has really caught its first real glimpse of Prince George. He has been kept behind the scenes for the most part since his birth last summer and so this tour through New Zealand and Australia, alongside his parents Kate Middleton and Prince William, is really like a coming out party. We’ve watched George have his first public play dates and interact with strangers just as easily as Kate Middleton and Prince William do. He seems to be a well adjusted and happy baby . . . but what exactly is life like for the youngest Prince?

Well according to the May 5th print edition of Us Weekly, George is on a special organic diet and, as expected, Queen Elizabeth does indeed have a list of royal dos and don’ts that are expected to be followed to the letter. Speaking of not following rules, Lindsay Lohan is known for rarely honoring the terms of any contract that she enters into.

She recently claimed that she refused to film her docudrama on Oprah’s network because she had suffered a miscarriage. Needless to say, there’s been a lot of speculation as to whether or not she is telling the truth and Us Weekly attempts to get to the bottom of it. I find it interesting that Lindsay wouldn’t have clued Oprah in. One phone call could have saved everyone a lot of angst and then Oprah could also have vouched for her now. Instead, we are left with a typical Lindsay situation and everyone’s struggling to believe her.

Have you heard about the drama behind the scenes at Glee? Apparently everyone is fed up with Lea Michele’s diva antics and Naya Rivera decided to speak out to producers on behalf of the group and, well, it was downhill from there. A big game of she said/she said has followed and the May 5th print edition of the tabloid attempts to pick apart the drama. We have heard rumors of Lea’s bad behavior before. Do you think that she really is that difficult to work with? Tell us your thoughts in the comments below!