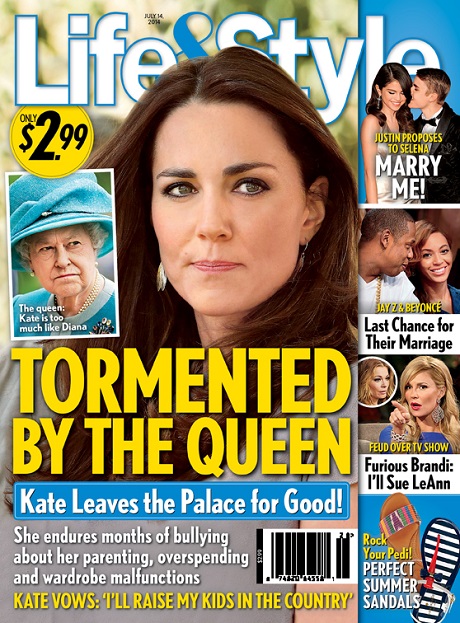 Marrying into the royal family is no small task and, while Kate Middleton originally thought that raising Prince George in Kensignton Palace was a good idea, she quickly learned otherwise. She and Prince William settled into a spacious apartment there last fall but the duchess has been under a microscope ever since. According to the July 14th print edition of Life & Style Magazine, Queen Elizabeth has dissected Kate on a daily basis about her parenting style and overspending.

Sources say that Kate’s wardrobe malfunctions have made living at the palace especially difficult and that she feels bullied by the royal family. Having Camilla Parker-Bowles nearby is like a nightmare come true for her! The solution is for Kate and William to move their family into their country home at Anmer Hall. The place is currently under renovation and, as soon as it’s ready, the couple will be making the spacious country house their main home base.

Could Justin Bieber and Selena Gomez actually be engaged? Well, according to the new issue of Life & Style, he actually has popped the question. Perhaps this is just another way that Justin is trying to prove to Selena that he has changed. Are you buying it? Speaking of messy relationships…Jay Z and Beyonce’s marriage is a wreck and the rapper is supposedly jumping through hoops to save things. He has reportedly cut ties with any of the women that Bey was suspicious of, including Rachel Roy. According to Life & Style, the couple is also invested in going to therapy and getting some help.