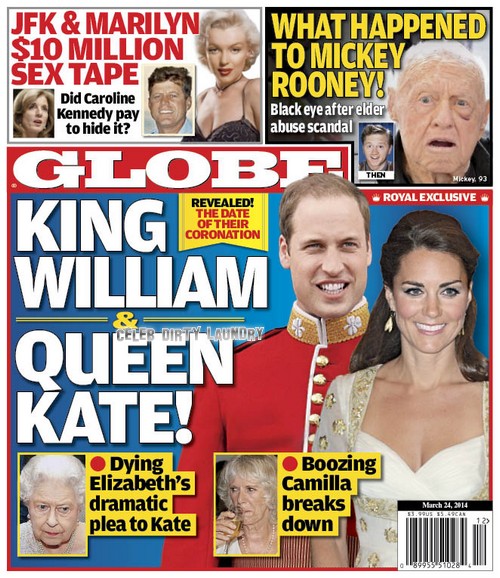 As Queen Elizabeth’s health continues to deteriorate it seems that the battle for the throne is only just beginning to heat up. While it would traditionally be Prince Charles’ birthright to take his seat on the throne after Elizabeth that doesn’t mean that she wants that to happen. We have heard for months that it is actually Prince William and his wife Kate Middleton who are favored to be the next King and Queen of England. They are far more respected than Charles and his lush of a wife, Camilla Parker-Bowles. Plus they now have a young family which means that they can relate to a lot of similar issues that the commoners are facing. Camilla has tried to force Charles to fight for his rightful place and has threatened to ruin him by telling all of his secrets to the press during what would likely be one of the nastiest divorces in royal history.

We have heard rumors that Queen Elizabeth is planning to step aside this summer and according to the March 24th print edition of GLOBE magazine a Coronation date has actually been set – but not for Prince Charles and Camilla, but for Prince William and Kate! It sounds like Elizabeth has watched all four of these major players very closely over the past few years and has drawn her own definitive conclusion over who should follow her legacy.

Needless to say this has left good old Cami fuming and on one of her typical drunken benders. Of course she has been swinging threats for months and I have to wonder if Charles worries about whether or not she’ll make good on any of them. A tell-all interview about her husbands’ rumored gay affairs and other palace secrets would disgrace the royals while making Camilla a very wealthy woman.

Micky Rooney has a black eye it seems and GLOBE is right on the elder abuse scandal that might have caused it. It’s awful how people in a compromised situation are often abused by those with power over them. Luckily GLOBE is here to expose this disgusting state of affairs.

GLOBE loves to dig into the past and break new news regarding some of Hollywood’s favorite names. After decades of rumors about JFK and Marilyn Monroe’s sex games it seems that a tape may be in existence that documents some of their private time together. According to the March 24th print edition, Caroline Kennedy may have paid millions to keep a sex tape under wraps. Sex tapes made by stars seem to be worth a lot of money but is there really public interest in actually seeing the footage?

GLOBE blasts out another marvelous issue this week and nobody should miss it. I know that as soon as my work is completed I’ll be dashing off to the store to pick up my copy of GLOBE. Imagine the uproar in the palace once Queen Elizabeth’s decision to bypass creepy Camilla and bumbling Charles in favor of Will and Kate gets out! Trust GLOBE to be the first news source to get right at the heart of matters and expose the truth – no matter how shocking the story.