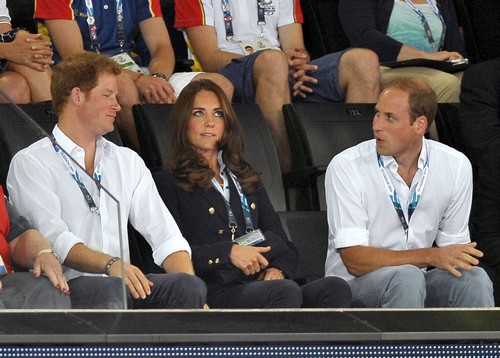 Kate Middleton is sick and furious at being left behind while Prince William and Prince Harry were off drinking and partying at a fun wedding! It hasn’t even been a month since Kate Middleton’s pregnancy went public, but there already seems to be some scandal surrounding the future princess’s baby bump. After pregnant Kate declared war on the wretched Camilla Parker-Bowles and kicked her out of the Royal family, it looks like she has another problem to deal with, Prince William is back to his old partying ways! Prince William and Kate Middleton are officially expecting baby number two, the Palace confirmed the Duchess of Cambridge’s pregnancy on September 8, and Prince William is already taking advantage of Kate’s bed-rest orders.

Prince William and Prince Harry headed back to Gloucestershire, England to attend their friend Victoria Inskip’s wedding to Robert Davis-Jones, and Kate Middleton was nowhere in sight. William knows that Kate is on strict bed-rest, and had to cancel all of her appearances because of her morning sickness. She could never go attend a wedding, after neglecting her royal duties. So, instead of staying home and tending to his wife who couldn’t get out of bed, William decided to go to the wedding with his younger brother Harry and have a “guy’s night.”

Anyone who follows the Royal Family knows that Prince William was pushing Kate Middleton for a second child, and he was even quoted earlier this year announcing that Kate would be pregnant by Christmas (and she is). Considering all of the drama and problems Kate had with her pregnancy with baby George, it’s safe to assume Kate was willing to wait a while before baby number two, but Prince William wasn’t having it. He wanted a second baby ASAP, and now that he got what he wanted, he has ditched Kate and gone to party with his brother Harry while she lay in bed battling the hyperemesis gravidarum.

Do you think it is wrong for Prince William to go party at weddings with Prince Harry while Kate Middleton is home with morning sickness? We all know that Harry and William get out of control when they drink together, do you think that William was flirting with other women at the wedding without Kate by his side to reel him in? let us know what you think in the comments.