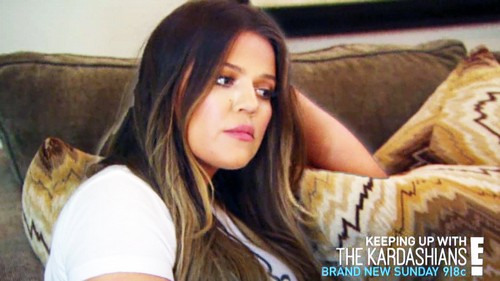 Keeping Up With The Kardashians continues tonight with a new episode called, “Design for Disaster.” On tonight’s episode, Kourtney helps Khloé decorate her house, but Khloé gets upset when she receives a hefty bill for her sister’s services.

On the last episode, Part 3 of 3 the family vacation to Thailand continues to be full of drama, beginning when Kim connects with a young girl in a Thai orphanage. Brody and Brandon cheer up Khloe. Did you watch the last episode? If you missed it we have a full and detailed recap, right here for you.

On tonight’s episode Kourtney helps Khloé decorate her house, but Khloé gets upset when she receives a hefty bill for her sister’s services. Meanwhile, Kris helps her mom overcome her fear of using medical marijuana, but when Bruce finds out he gets angry and wants the stuff out of his house.

Tonight’s episode of Keeping U With The Kardashians kicks off with Kim signing copies of her Vogue cover, Kourtney and Khloe come over and Kim begs the to go to the newsstand in the morning with her to see her cover. Kourtney and Khloe both have better things to do, and Kim’s feelings are hurt. Khloe jokes that she reads “Kim’s Vogue on the john.”

The next day Khloe meets up with her interior designer Martyn so that he can get to work on the house she just bought. She’s overwhelmed by all of the things that Martyn wants to change. Meanwhile, Kourtney is at her now house with her Mom and Grandma MJ and giving her a tour of her new house.

Later Kourtney and Khloe surprise Kim with a blown up and framed picture of her Vogue magazine cover. They apologize to her for not being as supportive of her as they should have been and gush about how proud they are of her. Afterwards Kourtney takes Khloe furniture shopping to look at things for her new house, since she doesn’t want to spend a lot of money on an interior designer. Kourtney takes Khloe all over town checking out furniture and rugs and getting her discounts

Kim heads out with her Grandma MJ, MJ fills her in on her back problems and what she is doing to stay in shape. They meet up with Kris for lunch at a restaurant. MJ tells Kris Jenner about her back pain and having an epidural. Kris is scared because her Mom has lost a lot of weight since she got scoliosis.

Kourtney and Khloe head home and Kourtney puts together a vision board for Khloe and shows her pictures of all of the furniture and décor she picked out for her new house. Kourtney secretly wants to be an interior designer and is getting a little carried away.

At Kourtney’s house she gives Khloe her expense report and a total of all of the items that she is buying for her new house. Khloe is confused when she sees a services fee for $25,000. Kourtney explains that she doesn’t work for free and that is her design fee, Khloe is floored because she thought Kourtney was helping her this entire time just because she was a good sister.

Kris arrives at a hookah store, and the store employee shows her all of the pipes and bongs that she could smoke her weed out of. She buys a leopard print bong with a matching carry case for her Mom since she knows she loves animal print.

Kris heads home super excited to tell her Mom about the medical marijuana store, but MJ surprises her and informs her she already has a prescription and she eats “magic gummi bears” that have marijuana in them.

The Kardashians all head to Miami for the DASH grand opening. They arrive at their hotel, the Versaci Mansion. Kim can’t wait to have a photo shoot in her hotel room, and in Kourtney’s room she and Scott Disick are pumped to find a gift basket full of whipped cream and KY Jelly. After they get settled in, Kim and Khloe head out to dinner with their friend Jonathan. Khloe rants about the bill that Kourtney sent them, and they both agree with her that Kourtney is being ridiculous.

The next day Kim, Kourtney, and Khloe get ready with their stylists for the DASH opening. Kourtney and Khloe bicker the entire time about their hair because Kourtney is still upset over Khloe not being paid. They all head down to the DASH opening, and chat with the press and take photos inside the store.

Back at the Jenner house, MJ is getting ready to take one of her magical gummi bears, and she convinces Kris to take one as well. An hour later they sit in the living-room with their incense burning, eating chips and dip, and giggling. Bruce arrives and wants to know what is going on. He informs them he “wants that sh-t out of the house.” Kris and MJ laugh hysterically at Bruce, and clearly aren’t taking him serious. He tells them to get the marijuana out of the house before Kylie and Kendall come home and says they are setting a bad example.

In Miami Scott is getting drunk with his friends at the Versace hotel. They head out to eat at Sole Resturant, Scott starts making a fool of himself and yelling that he is the Lord to all of the screaming people at the window. Jonathan jokes that Scott is “on one tonight.” Kourtney is stressed out and embarrassed, she wants to get out of Miami ASAP. Kim thinks Scott is being too hardcore. Khloe and Jonathan take Scott upstairs and put him to bed.

Back in Beverly Hills, Kim takes MJ to the construction site where her and Kanye’s house is being built. She gives her a tour of all of the rooms that are being built, and then reveals they are having a second kid’s room in case she gets pregnant again. MJ gushes that the house is beautiful but they need to build a bar.

At Kourtney and Scott’s house, Khloe gets a random phone call from Lamar. Apparently his father is dying, Khloe tells him that he needs to visit his dad and he needs to stop playing mind games. She lectures him about being selfish and expecting her to fix all of his problems. Kourtney feels guilty about Khloe’s issues with Lamar and decides to make amends with her and thanks her for taking care of Scott in Miami. She decides to bury the hatchet over the interior design bill, and offers to help her on her house for free.