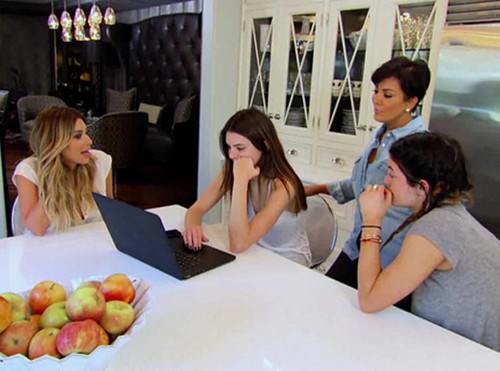 Keeping Up With The Kardashians continues tonight with a new episode called, “2 Birthdays & A Yard Sale.”  On tonight’s episode as Kendall gets ready to turn 18, she makes plans to move out of the house; and Bruce plays off his upcoming birthday like it’s no big deal. Meanwhile, Kourtney wants the family to hold a yard sale.  Did you watch last week’s episode?  We did and we recapped it right here for you.

On last week’s episode the family gathered in San Francisco to surprise Kim on her birthday but the real surprise was Kanye proposed to Kim.  Kris knew all about it but she was not letting the cat out of the bag. Meanwhile, Scott headed to New York to spend time with his father and sick mother.

On tonight’s episode Kourtney attempts to organize a family yard sale. Kendall prepares for her 18th birthday and makes plans to move out of the house, while Bruce tries to pretend his upcoming birthday is no big deal.

Tonight is going to be another crazyepisode that you won’t want to miss, so be sure to tune in for our live coverage of E!’s “Keeping Up With The Kardashians” tonight at 9PM EST! Meanwhile, while you wait for our recap hit the comments and let us know how excited you are about this season of KUWTK?

Tonight’s episode of Keeping Up With The Kardashians opens with Kendall making plans for her 18th birthday. She wants to take a trip to Magic Mountain. She reveals to Kim and Kris that she plans on moving out when she turns 18, because she wants to be an “independent woman.” Kim tells her she should stay at her Mom’s house for as long as possible.

Kourtney and Scott are trying to find something in their garage, but they are overwhelmed by all of their junk. Kourtney decided she wants to have a yard sale, it would be her “dream come true.”

Kris is out to dinner with her cousin Cici and Jonathan, Jonathan has brought his friend Roman and jokes that he is “hooking him up with Kris.” Kris reveals that Kendall is looking at houses, she is not dealing with her 18th birthday well, she doesn’t want her to leave home.

Bruce is out to lunch with Kendall and Kylie. Bruce receives a phone call from Khloe, she wants to throw him a birthday dinner for his 64th birthday. Bruce confesses that he thinks Kendall, Kylie, and Khloe are the only people that care about his upcoming birthday.

Scott, Rob, Kourtney, and Khloe head out to lunch and Kourtney fills them in on her yard sale plans. Rob thinks they should have an “all nude yard sale” and Scott plans to sell his penis enlarger.

At Kris’s house Khloe, Kim, and Jonathan are going through Kris’s stuff to find items to sell in their yard sale. They think Kris could be a hoarder. Kris confesses that she liked to be prepared for “any and everything.”

At the beach house Bruce discusses her house buying plans with Bruce. She has a realtor helping her find a house. Bruce is excited because Kendall wants “space of her own,” and he knows what it is like to want to get away from all the Kardashian drama, so he is happy to help.

Kourtney and Kim are in the car and they receive a phone call from Khloe, she is trying to plan Bruce’s birthday dinner and wants to make sure they are coming. Khloe says that she thinks Kim and Khloe have been neglecting Bruce. After Kim hangs up she confesses to Kourtney that Khloe is making them look bad and always has to try to be Bruce’s favorite. Kourtney and Kim are determined to outdo Khloe’s birthday dinner so they are tracking down his old Olympic teammates and inviting them to Bruce’s birthday.

Bruce and Kendall are on their way to look at houses for sale. Bruce thinks she should consider moving out to Malibu, by her older brothers. After looking at the houses, she still hasn’t found one that she is in love with.

It’s time for Kendall’s birthday, her friends and her family have rented out Six Flags Magic Mountain for the day. While the girls are riding the roller coaster Kris pulls Bruce aside and wants to know why he is helping Kendall look at houses. Kris is annoyed, she doesn’t want Kendall to move out and leave her, and Bruce is helping her do just that.

Now it’s time for Bruce’s birthday dinner, Khloe is annoyed because no one has showed up to Bruce’s dinner except for Kylie and Brody. She begins calling her family to find out where they are. Kris finally arrives…late, with Kim and Kendall. After every one sits down to eat, Fred and Fred, Bruce’s Olympic teammates arrive. Bruce is excited to see his teammates, it is the first time they have gotten together in 35 years.

The next day Kris and Bruce head to their storage unit to clean out their junk and put it in their yard sale. Kourtney and Khloe are cleaning out Kourtney’s garage and getting ready for the yard sale. They kick off the yard sale, and even hired a professional sign twirler, they plan to donate all of the money they make to charity.

Kourtney is upset because she realizes that her family has put things in the yard sale that she didn’t want to sell. She has to come to terms with the fact that she is a hoarder too, just like her Mom.