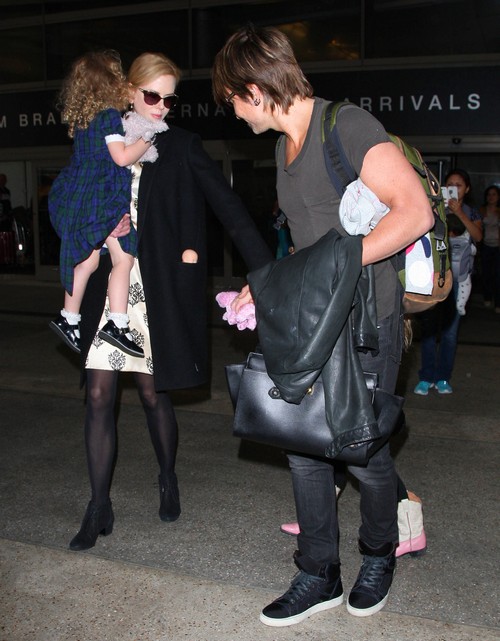 Nicole Kidman has had a rough few months and it looks like things aren’t going to improve any time soon. Her career is on super shaky footing after her portrayal of Grace Kelly in Grace of Monacco was universally panned. The film was originally thought to have Oscar potential but the finished project amounted to a hot mess of pretty scenery. By the time it debuted at the Cannes Film Festival in May Nicole couldn’t get out of France fast enough.

She has also watched as Keith Urban’s career continues to thrive. He was thought to be one of the few bright spots on last seasons’ American Idol and his music career is going well. Nicole has been clinging to her family extra tight because she fears that if she doesn’t work again in Hollywood then at least she has her husband and kids. According to the July 21st print edition of Star Magazine Keith can’t stand having Nicole and their two daughters on tour with him.

Apparently her clingyness has only caused major fights between them. Now she feels like Hollywood and Keith are both rejecting her and it’s sent Nicole spiraling out of control. The fights have been epic and instead of pulling her husband closer to her she’s pushing him in the opposite direction. If something doesn’t change soon all of that divorce talk isn’t just going to be a rumor. Should Nicole jump back in and start auditioning again rather than chasing after her husband? Technically wouldn’t saving her career also kind of save her marriage? Tell us your thoughts in the comments below!