Kendall Jenner Posts Chic Pic Of Her Riding On Back Of Vespa With Hot Model – Trying To Make Harry Styles Jealous! (PHOTOS) 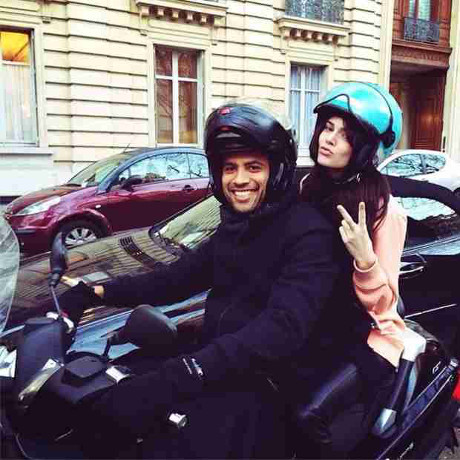 Never one to be left out of the spotlight for too long, Kendall Jenner‘s now making headlines for her alleged relationship with One Direction’s Harry Styles. But has this rumored hookup already hit a stand-still? Perhaps. It was reported that Harry Styles was seen in London fashion week with Allison Mosshart, the 35 year old singer of the band The Kills. They were seen flirting at a night club, where they allegedly got quite intimate with one another.

Recently, Kendall instagrammed a photo of herself with a handsome man on the back of a Vespa. Perhaps Ms. Jenner is firing back at Harry Styles after he was caught out and about with someone other than her. Maybe little Miss Kendall Jenner is taking matters into her own hands and showing Harry Styles that two can play this fickle dating game. It wouldn’t be surprising that Kendall has the hots for this Vespa man. He looks like he could even be a male model, too. Maybe someone she could relate to better than Harry?

With all of the career success Kendall Jenner has garnered (e.g. Mark Jacobs runway, plus sitting by Anna Wintour at fashion week), it’s become increasingly clear that her star power is rising. Maybe she is realizing that she wants a man with a little more substance or, let’s be honest, meat on the bones — something a bit more than a teeny-bopper musician who gets followed by screaming adolescent girls all day, every day.

She even tweeted this picture to her father, saying, “Now, dad, I know you told me never to get on the back of a motorcycle with someone, but a Vespa’s ok right? #oops.” It appears she may have even introduced this man to her father, and that might imply something’s developing between Kendall and this mystery man, right?

Though, when all is said and done, you never know what’s truly going on with Kris Jenner’s girls; she’ll probably end up with someone new the next week. I guess we’ll just have to sit tight and keep up with Kendall Jenner to see where she lands next.