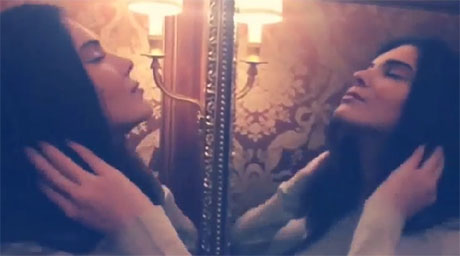 Kendall Jenner just can’t stop posting pics/vids of herself can she? The Keeping up with the Kardashians star and model recently posted a video of herself on Instagram featuring her throwing down (what we think to be) some twerk moves. And let’s just say . . . Miley, we don’t think you have to worry about Kendall stealing your twerk spotlight anytime soon because this girl needs some P-R-A-C-T-I-C-E before she starts dominating any charts.

In the video, Kendall begins in front of the a hotel room window, then the vid cuts to a scene of her primping herself in the mirror. She then proceeds down the hotel hallway, only to throw down her attempted TWERK. We then see her parade through the lobby, where she blows a kiss to her *adoring* fans, who are freaking out and trapped behind the glass lobby doors.

The point of this video? It truly is impossible for us to know the reasonings behind anything that the Kardashian/ Jenner girls do, especially when it comes to their social channel postings. This is just one of many “sexy” Instagram postings made by Kendall in the past few months — and it doesn’t seem as if she’s planning on stopping anytime soon. Apparently, her fans love her for them. She currently has 10+ million followers. And her fanbase continues to grow.

Watch the video below and let us know what you think. Are you in full support of Kendall’s tried-but-sort-of-lame attempt at twerking?