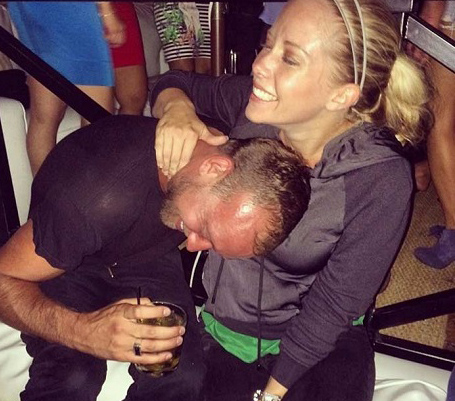 I have no doubt this has been the worst summer of Kendra Wilkinson’s life. It started off with a world of promise as she and Hank Baskett welcomed their baby daughter Alijah to the family but within a few weeks their marriage imploded thanks to his cheating. Kendra has spent the last several weeks dealing with the reality that Hank not only cheated, but that he hooked up with a transsexual while she was pregnant. Now we’re hearing that this isn’t the first time that Hank has been caught with his pants down.

Kendra is going to get a divorce before too long. No doubt the famewhore will drag the maximum amount of publicity and money out of her sordid married life before officially filing for divorce but that result is inevitable. Kendra is already going out partying and fooling around with other men. It’s only a matter of time before separation, divorce, and split become the words most closely associated with Kendra and Hank.

According to the Aug. 4th print edition of In Touch Magazine about a year and a half ago Kendra’s friend tipped her off to the fact that Hank was hooking up with a stunning brunette. Before that nugget of info Kendra had suspected that he had been messing around and so she confronted him and Hank pretty much admitted it. Kendra didn’t want her son to come from a broken home so she slowly worked things out with Hank and trusted him enough to have another child. Unfortunately that trust was misplaced. Naturally we also heard that Kendra did her fair share of cheating too.

Sources say that in recent weeks Kendra has struggled to get out of bed and that she and Hank aren’t really on speaking terms. They live apart and their conversations are restricted to co-parenting issues. Kendra reportedly knows that she will ultimately have to divorce Hank because there is no way that she’ll ever be able to trust him again. How long do you think that it’ll be before Kendra officially pulls the plug on her painful marriage? Are you shocked to learn that Hank has been a serial cheater? Tell us your thoughts in the comments below!