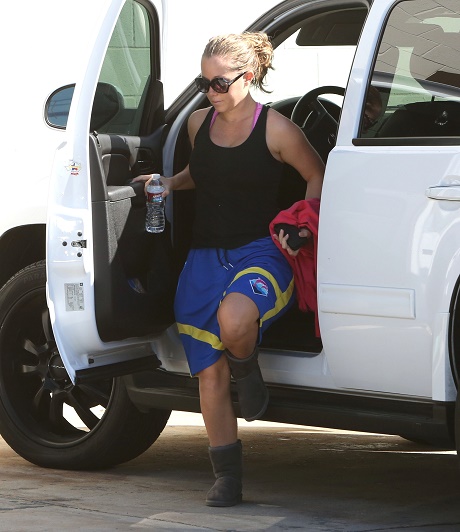 Kendra Wilkinson is pretending to have the wool over her eyes on the recent affair between her husband Hank Baskett and a transsexual model, who gladly disclosed the sordid details of the affair.  In an idiotic attempt to not look…well…idiotic Kendra  is claiming she is not sure what or whom to believe, so that her decision to keep Hank around rather than give him the boot won’t get as much backlash.

As soon as the affair became public and details from the model were released, photos surfaced that supported the model’s claims. The fact that Hank hadn’t publicly denied the allegations and that Kendra had reportedly kicked him out further fueled the reports that a split was inevitable. However, not wanting to be alone, and definitely not wanting to ruin her main source of income, Kendra knows she’s got to keep Hank around to keep the show Kendra on Top going, and she is well aware that the drama surrounding the affair and potential divorce make for great tv.

Radar Online reported that Kendra has only admitted that there is a possibility of infidelity, but that she doesn’t care either way, sharing “[Hank] deserves forgiveness I’m willing to spend the rest of my life to figure this out rather than spending one night single without Hank in my life.” Kendra went on to call the model a “piece of sh*t con artist” who she could not believe, despite the fact the model passed a polygraph test.

While it is one thing to say that you and your cheating hubby have made the conscious decision to stay together for the sake of the children, it is simply pathetic to say that your husband wouldn’t be with a transsexual when, deep down, you know that he had. “I know for a fact Hank is not gay,” Kendra shares. “He’s not into transsexuals.” Okay, Kendra…you keep telling your fans that. She contradicts her confident statement just moments later when she dishes, “I’m willing to forgive him even if he did it.”

Okay, CDLers…I’m depending on you to call it like it is. Is the whole thing a publicity stunt? Is Kendra simply desperate for the paycheck or does she really believe he didn’t cheat? What do you think about her decision? Share your thoughts below.