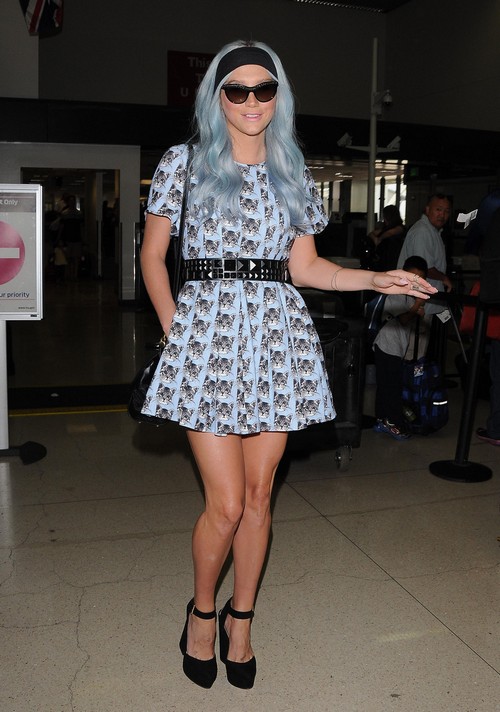 Kesha seems to have really turned herself around since leaving rehab a few months ago. I have to admit, when she took a seat on the couch the other night to chat with Jimmy Fallon I almost didn’t recognize her. Not only did she look totally pulled together and refined – even with blue hair- but she also sounded like a completely different person. While Kesha might still be crazy she no longer sounds it. In fact she has started to talk about her whole ordeal.

According to the Aug. 4th print edition of In Touch magazine Kesha credits a photograph for kicking off her vicious cycle with her eating disorder. You may remember the shot the bloated singer wearing a bikini on an Australian beach back in 2011. At the time she caught a lot of flack and was made fun of for her beer bloat and apparently being so harshly judged by Hollywood for how she looks did a real number on Kesha’s head. She is now the first to admit that she’s working in an industry that really dissects women’s bodies and vilifies them for being less than perfect. I guess she’s now feeling pretty confident about dealing with the pressure though.

As for what Kesha has been up to since rehab, she is writing songs and working on her next album which is still top secret according to her. Are you guys glad to see Kesha getting herself together after a few rough years? Are you surprised by how honest she is being about Hollywood’s negative influences? Tell us your thoughts in the comments below!

Kesha arriving on a flight at LAX airport in Los Angeles, California on July 25, 2014. Kesha was rocking a cat covered dress and was given some sunflowers as she left the terminal.