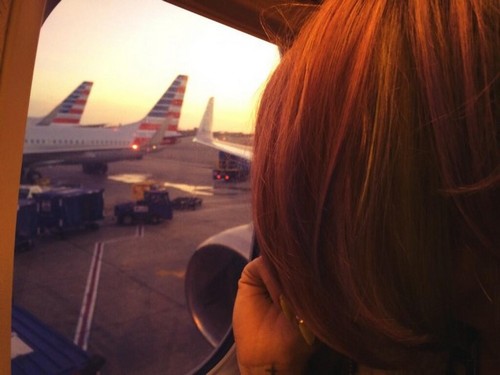 Kesha has finally completed her two month stay in rehab, according to her Twitter. She had admitted herself into rehab in January for an eating disorder, but it looks like she’s out and feeling much better.

She tweeted on Thursday night, “Happy to be back. Feeling healthy & working on tons of new music. I can’t thank my fans enough for all the love & support u have given me.”

She also shared a photo of herself boarding a plane, which means that she’s already swinging back into the thick of things. While an eating disorder is a serious condition, after recovering from it, it’s easier to stay on the path of good health than it is from a serious drug addiction. With a proper routine and guidance from friends and families, Kesha shouldn’t be having issues again – so long as she keeps her schedule sane and doesn’t succumb to the same pressures as she did before. Considering that she’s not planning on retiring, I’m sure there’ll still be issues that she’ll have to work through, but rehab no doubt helped with the major problems.

Kesha had initially postponed her spring tour to extend her stay at rehab. Her mother had claimed that Kesha’s team was responsible for the criticism that drove Kesha to develop an eating disorder, so it’ll be interesting to see if she changes her team or if she keeps them. Hopefully she’s recovered and manages to stay in good health, especially throughout her upcoming tour and hectic promotional schedule.