Khloe Kardashian, Lamar Odom A Couple Again: Back Together – Lamar Cleaned Up And Sober! (PHOTOS) 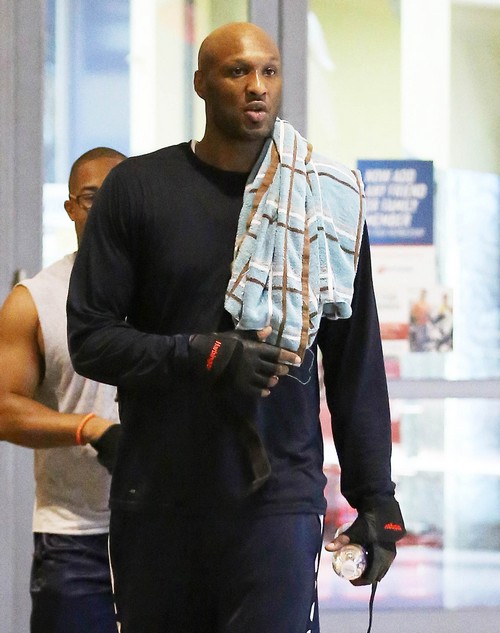 Khloe Kardashian and Lamar Odom have been spotted back together dating according to recent reports and we believe it! Khloe and Lamar have always had a tumultuous relationship, but I don’t think anyone can deny that they truly loved each other. However, Khloe tolerate Lamar hooking up with every other crack ho in LA and then slowly spiraling down the path of drug addiction, and she couldn’t help him. She tried her best to save their marriage, but eventually, she did what she had to do and let him go. Lamar fought against her decision, but there’s no better way to reaffirm your commitment to your wife than to sleep with a harem of hookers, is there? Khloe made the smart decision in moving on, after giving Lamar an ultimatum about changing his life if he wanted to win her back.

It took almost a year, but Lamar has been photographed looking cleaned up, sober, and fit – for the first time in a long, long time. And if he’s finally cleaned himself up, what to stop Khloe from getting back together with him? I mean, the only reason Khloe Kardashian ever divorced Lamar Odom was because of all the drug use and the cheating, but EVEN then, she tried to stand by him and let him recover on his own time. When he didn’t, Khloe went out and played the field a little, using French Montana as her rebound and no doubt making Lamar jealous in the process. Maybe that spurred him to recover faster, but whatever it did, Lamar has finally gotten his life back on track. In the end, Khloe Kardashian and Lamar Odom actually love each other, and it makes sense that they would be back together. Our sources have been saying that they’re back together, other reports have been suggesting it, and it’s only a matter of time before we see Khloe and Lamar photographed dating and back together on the path to official reconciliation.

Troubled NBA star Lamar Odom is spotted leaving the gym after enjoying a workout with friends in Los Angeles, California on October 5, 2014. Rumor has it that Lamar and Khloe Kardashian may be trying to reconcile their failed marriage! The couple officially split about 18 months ago but it is being reported that Khloe & Lamar were recently spotted together and are in constant contact again via text. Image Credit: FameFlynet