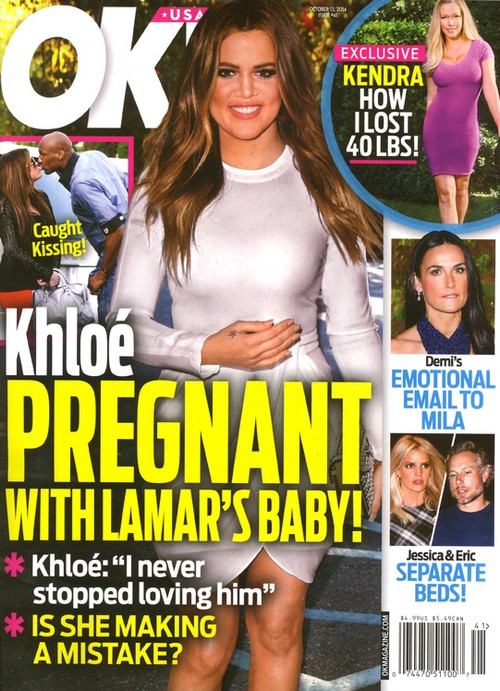 Khloe Kardashian’s eventful love life continues to be a source of entertainment for all of us. The Keeping Up With The Kardashians star definitely keeps us guessing which man she is going to wind up with next. In early 2014, Khloe and Lamar Odom officially went their separate ways, and a messy divorce ensued, ironically it was later revealed that Khloe never officially divorced Lamar and didn’t finish filling out the paperwork. None the less, Khloe began serial dating half of the west coast and finally shocked her friends and family by settling down with rapper French Montana.

Khloe Kardashian and rapper French Montana’s whirlwind romance actually lasted way longer than any of us expected, so kudos to them, but the inevitable finally happened and after eight months they broke up and went their separate ways. However, according to the latest edition of OK! Magazine, Khloe is far from devastated about her relationship with French Montana crashing and burning, because she has been secretly talking to Lamar and having secret meetings with him this entire time, and the couple is getting back together! In fact Lamar and Khloe are dating and have been seen together on several occasions.

The October 13th edition of OK! Magazine reveals, “As Khloe and Lamar work towards reconciliation, friends are buzzing that their hot hook-ups may have brought them an unexpected surprise – just in time for their fifth wedding anniversary!” OK!’s inside source explains, “Khloe has been acting very strange over the last few months, refusing alcohol and ditching activities with her friends and family because she doesn’t feel well. Even though she hasn’t told anyone that she is pregnant, it is no secret to her loved ones that she has been seeing Lamar.”

Wow, after all of the Lamar bashing that the Kardashian family did on the latest season of Keeping Up With The Kardashians, I don’t think anyone expected Khloe and Lamar to get back together. Then again, this report could be complete fiction and they may not be back together. Do you think the story in OK! is true and Khloe and Lamar are back together and expecting their first baby together? If Khloe is pregnant, isn’t there a good chance the baby is actually French Montana’s? Let us know what you think in the comments below!