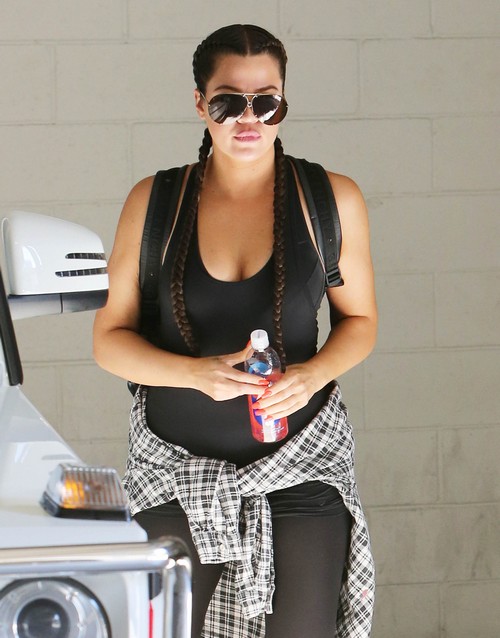 According to the latest edition of OK! Magazine, “Khloe Kardashian has been hitting the gym hard lately, and she’s got more than fitness on her mind. A source says that Khloe’s considering posing for Playboy, and looking to outdo her sister Kim’s recent “internet breaking” all-nude pictorial in Paper Magazine.” The magazine’s inside source goes on to explain, “Khloe is dying to prove she’s just as hot as her sisters. She thinks her curves are a perfect fit for a men’s mag and being in Playboy has always been a dream of her’s.”

OK! goes on to reveal that Khloe’s nude pics come at a hefty price, and she plans to charge Playboy $1 Million for the spread. But, she thinks that price is totally worth it because she has been hitting the gym religiously and keeping a food diary. We could totally see Khloe posing nude, no doubt about it, but it’s difficult to believe that a magazine is going to pay her $1 Million to do it, regardless of how many times she goes to the gym. Kim Kardashian could easily get the cool $1 million for another Playboy Magazine spread!

If Khloe poses nude, do you think she will be able to “break the internet?” Or is she just setting herself up for some cruel ridicule and comparisons to her sister Kim? Besides, does Playboy do plus-size? In all honesty, who would you rather see naked, Kim or Khloe (or Kanye West)? Let us know what you think in the comments below!

Khloe Kardashian rocks some braids while hitting the gym for a workout in Beverly Hills, California on November 26, 2014. Khloe recently revealed that she still thinks about her estranged husband Lamar Odom saying, “If I had my way, I would still be married to Lamar. Even now, today, I wish I was still married to him!” by FameFlynet