Khloe Kardashian Pregnant By French Montana But In Love With Another Man? (PHOTO) 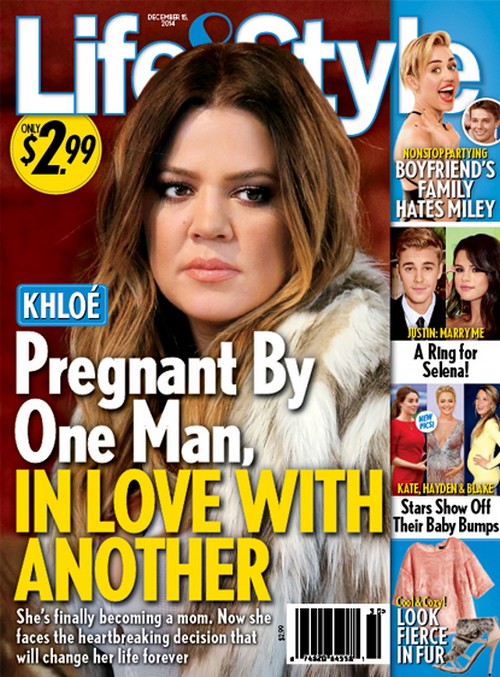 According to the latest cover of “Life & Style” magazine, reality star Khloe Kardashian is in love with one man, but is pregnant by another! Uh oh! We’re going to take a wild stab in the dark that Khloe is pregnant by her most recent boyfriend French Montana. It only makes sense, because they have been hooking up on and off for the past eight months. He recently opened up to TMZ about his hopes for the future with Khloe by saying that if he took a bullet to marry Sasquatch, that he wanted the benefits of having no prenuptial agreement in place so that at least he would get something out of it.

Now, it appears that she is finally getting what she’s wanted for so long – a baby! Unfortunately for Khloe, she is in love with someone else! She has been linked to The Game and her her estranged husband Lamar Odom, so it would figure that she has feelings for one of those guys.

The last time she called it quits with French, it was said that the reason behind the split was because she found some lingering feelings that she was harboring for Lamar, so this all entirely feasible.

Now that Khloe is finally becoming a mother like her sisters, she is facing a heartbreaking decision that could change her life forever. Who will Khloe choose to stay with? She has wanted a baby for such a long time and has felt jealousy over her sisters’ pregnancies forever – will she stay with the guy who knocked her up? Or will she follow her heart and go with the chance of having love in her life?

It only remains to be seen, but now that Khloe Kardashian is off of the market, it’s giving hope to other ugly overgrown Sasquatches* everywhere.

*No offenses to Sasquatches intended.