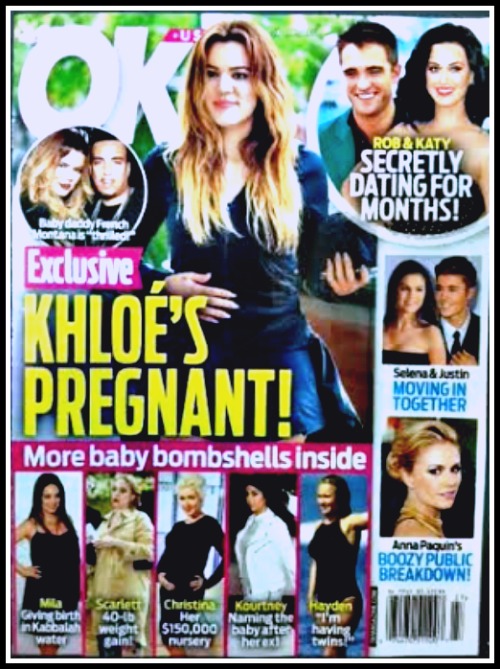 Remember this time last year when Lamar Odom was thought to be the worst guy on the planet for Khloe Kardashian? Well, leave it to her to out do herself. Not only has she latched onto French Montana, a rapper with a violent history that makes Lamar’s drug use look like nothing, but we’re hearing that Khloe is pregnant. According to the July 7th print edition of OK! Magazine, Khloe’s weight gain isn’t just because French has encouraged her to over-indulge these last few months, but it’s because she is in the first trimester of a surprise pregnancy.

Khloe couldn’t get pregnant while trying for years with Lamar, so she hasn’t exactly been careful with French because she figured it would never happen anyway. French is said to be thrilled with the baby news — probably because he’s enjoying spending Khloe’s money and this situation will keep him in her life.

Also in the new issue of OK! you can learn about some of Hollywood’s other pregnant stars. Could Mila Kunis be serious about wanting a water birth and how is Kourtney Kardashian handling carrying baby number three? Basically, minutes after confirming the happy news, baby daddy Scott Disick started partying so hard that he was kicked out of the family home!

We have been hearing rumors about Robert Pattinson and Katy Perry for months now and after their steamy make out session at an L.A. after party last week people are starting to wonder whether or not they’ve been a couple all this time! Have these two spent a few months figuring things out on the