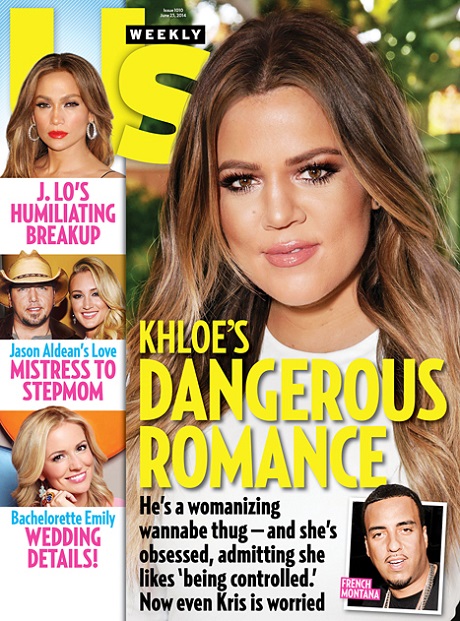 I think by now we all realize that there is something wrong with Khloe Kardashian, right? Her choice in men defies explanation and after setting her sights on the exact same man, just with a different name and rap sheet, her family is finally beginning to worry. Not only does Khloe gravitate towards bad boys but according to the June 23rd print edition of US Weekly, she had admitted to her family that she kind of likes being controlled by them!

Realizing that part of the appeal of her romance with French Montana is actually doing as she’s told has momager Kris Jenner really worried that this thug is only with her for the mint that she can offer him. Plus, if she is willing to do anything for him, then it’ll make her even more of an easy target. The problem is getting Khloe to see it that way. In her mind she is a party girl rolling with a bad boy and money is irrelevant because she has plenty to burn. How long before this romance explodes in Khloe’s lap?

Jennifer Lopez has had one hell of a week, hasn’t she? She dumped Casper Smart, canceled appearances, and then rescheduled them all in the name of not looking crushed by the demise of the 3 year relationship with her boy toy. According to US Weekly, you can’t really blame Jen for wanting to hide out after being embarrassed on such a huge public scale. Now, she’s trying to put on a brave face to move on quicker. Do you think this approach will work for her?