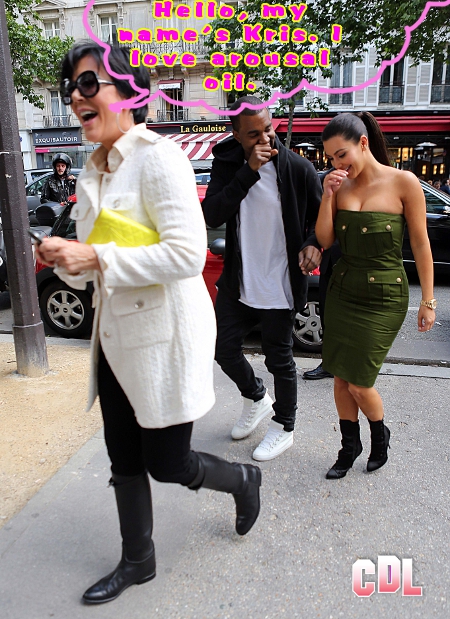 Kris Jenner continues to reveal too much information about her life. Now, Kris is opening up about her sex life, and let’s just say it’s about some things that a momager should keep locked up tight in the bedroom. When Kris appeared on The Doctors, she was asked how she keeps her sex life spicy and exciting. Of course, nothing makes Kris uncomfortable, so she gladly revealed her secret weapon: Zestra, a super powerful arousal oil!

“You apply in that area 3 to 5 minutes before you get crazy in the bedroom and it’s amazing,” Kris said. “It gives you an arousal that’s an amazing experience that makes you feel fantastic.”

If you want to check out the segment where Kris reveals the spicy details about her life, you can find the video here. We wonder how her poor children feel — probably cowering in a dark corner after this massive TMI (too much information) reveal on national television. Kim Kardashian, Khloe Kardashian, and Kourtney Kardashian — and probably Rob Kardashian, who just got a super large tattoo of his mama’s face on his arm — are probably just rolling their eyes. The Momager strikes again, and this time she’s tellin’ y’all how to get your super sexy time on.

Apparently, Kris Jenner is a national spokesperson for the arousal oil and it’s probably not the last time we’ll be hearing about. Actually, we’re surprised The Momager hasn’t slapped the Kardashian brand on an essential arousal oil of their own — that seems like a business venture that would definitely arouse her bank account. What do you think about Kris’ sexual revelations on national TV?