Lamar Odom Confronts Kris Jenner And Won’t Back Down 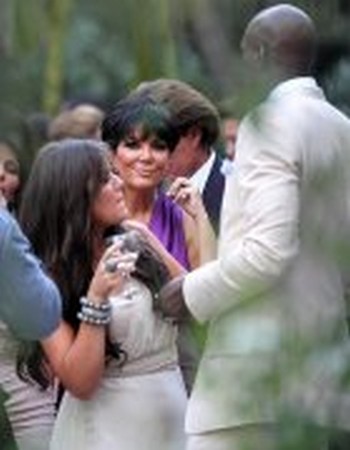 Lamar Odom finally told Kris Jenner to SIT DOWN. And she listened. She didn’t like it. But she listened and pulled the plug on Khloe & Lamar.

The scene played out in last night’s episode of the Kardashian spin-off when Kris brought Kim Kardashian  and Kourtney Kardashian to visit Khloe Kardashian and Lamar in Dallas when he still played forward for the Mavericks. After receiving a pep talk from his mother-in-law, Lamar ultimately decided that he didn’t want the cameras in his face anymore so he could focus on reviving his fledgling basketball career.

“Kris was not happy about the cancellation decision and is already trying to figure out how to keep Khloe and Lamar in the limelight. But this was Lamar’s decision. He wants to concentrate solely on his basketball career,” a Kardashian insider told Hollywoodlife.com.

Lamar is a basketball player so he should make his money playing basketball. Kris Jenner needs to understand that. These athletes that her daughters date – Reggie Bush, Kris Humphries, Lamar Odom – they didn’t grow up rich and privileged like the Kardashians. And they have a lot to lose in their respective careers. Kris needs to realize that these cameras and this fame she has launched on them hurts. It hurts their reputations. It hurts their focus and, most importantly, can hurt their bank accounts.

I’m not saying she doesn’t care for Lamar. It’s obvious in watching the show that Kris loves her son-in-law and that he loves and respects her too. She even sends out cute tweets like last week’s, “shopping with my son (Lamar) LOL”. I’m just not sure she always has his best interest at heart. She has her children’s and their brands’ best interest at heart and it’s not the same.

Regardless, Lamar knows Kris means well and it definitely comes across on the show like he appreciates all Kris has done for him especially since his own mother died when he was so young.

“Kris feels for me because she understands that my mother passed away at a young age,” he said on the episode. “She always has words of encouragement and it seems like what she says to me, sticks.”

But not this time, so good for Lamar. He needed to go with his gut on this one and get back to doing what he was born to do – play basketball. He can worry about reality shows when he’s retired. Kris will just have to find another way to keep the attention on the Kardashian name. And if I know Kris Jenner, she will.