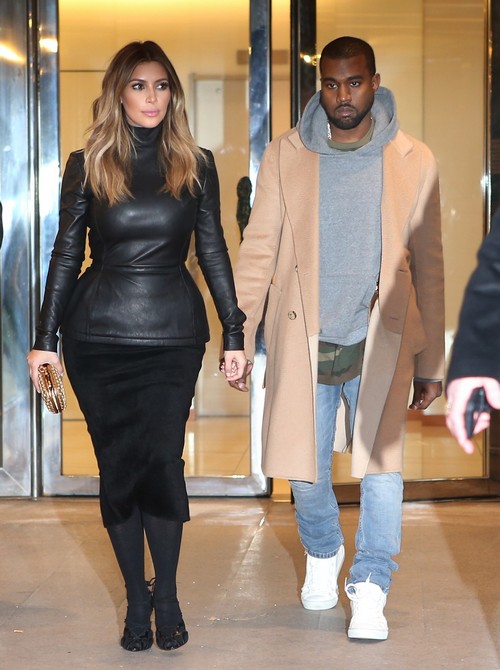 Kanye West and Kim Kardashian put their legal woes on the back-burner and packed their bags and headed to Paris. The pair were photographed this weekend attending Men’s Fashion Week. Just days ago Kanye assaulted a young small teen in a chiropractor’s office in Los Angeles, and local police need to question him about the incident, because West’s victim is planning on pressing charges. Apparently felony assault and battery charges are a joke to Kanye compared to Men’s Fashion Week in Paris, which is ironic because Kanye’s fashion is a joke to us. Wouldn’t it be nice to live above the law like Kim and Kanye do?

We all know Kanye wouldn’t let Kim set foot in Paris without picking out her outfits for her. Kardashian doubles as his personal incubator and dress-up doll. Kanye had Kardashian decked out in black the entire weekend. Kim paraded around the streets of Paris looking like a full-on ninja from her black boots, to her black pants, to her black skirt, to her black coat, the reality star even sported black sunglasses. You would have thought the Keeping Up With The Kardashian star was headed to a funeral and in mourning. Then again, maybe she is mourning her reputation, Kanye’s recent episode pretty much was the final blow. Kim Kardashian is officially Kanye’s mindless toy doll.

Considering it is Men’s Fashion Week in Kanye’s beloved Paris, the angry rapper kept his wardrobe pretty low-key. We assumed he would bring out all the stops while he paraded around the city, thinking he was royalty. But, West actually donned simple jeans and white tees. Then again, he probably would be blacklisted from Men’s Fashion Week if he tried to wear the bizarre leather ensembles that he wears in the United States.

Do you think Kanye should have the right to attend Fashion Week in Paris, while the eighteen year old he assaulted is stuck in LA recovering from the injuries he received from West?