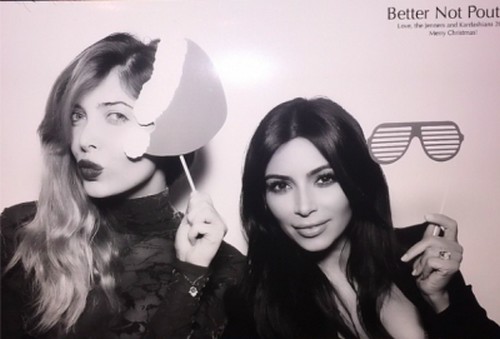 The media is always trying to play off Kim Kardashian, Kanye West, and Bruce Jenner as though they are enemies of Kris Jenner, but lest we forget, they are all still family. An incredibly screwed-up, dysfunctional, famewhore family, but a family nonetheless. Kris Jenner throws a massive Christmas Eve party every year in Los Angeles, and even though everyone was predicting that Bruce Jenner, Kim Kardashian, and Kanye West would be no-shows, all three controversial members of the family showed up.

I mean, of course they did! Kanye West and Kim Kardashian needed their weekly dose of famewhoring, and Kris’ party – however lame and useless – is covered extensively by Hollywood media. And Bruce Jenner? Well, the poor guy has been hit with a rash of publicity over the past few months, and the only thing people are talking about is his sex change. This was his opportunity to come out and ‘support’ his ex-wife, a.k.a. show the world that he’s not withering away at home, and still has a life.

Honestly, I think if it was up to Kanye, he would have ditched Kris’ Christmas holiday and jetted off to Paris. However, the divorce rumors are starting to get quite noisy, and Kim might have put enough pressure on him to convince him to stay in LA for the party. Otherwise, we would have ended up with yet another ‘Kanye ditches family for bro hangout in Paris, leaves Kim and North West in hotel’. Because, you know, it’s Kanye West – that’s exactly what he would have done.

What do you guys think? Were Kanye West, Kim Kardashian, and Bruce Jenner just making appearances at Kris Jenner’s Christmas party for publicity purposes? Or is there some larger, more nefarious plot at play here? Let us know your thoughts in the comments below.