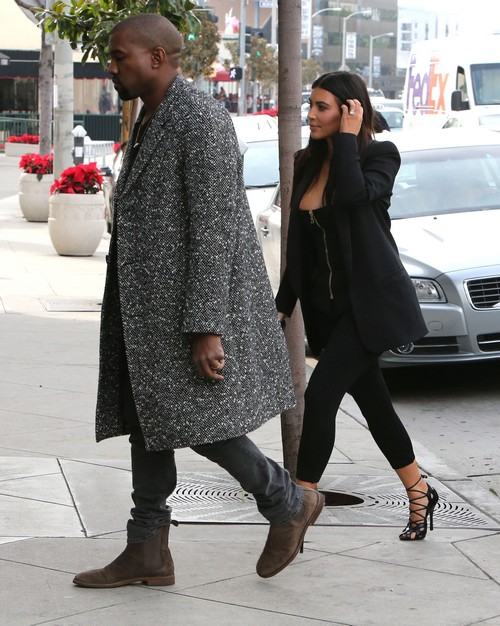 Kim Kardashian is pushing Kanye West towards divorce and she knows it! Between Kris Jenner trying to run their marriage and Kim’s demonstrably low intelligence Kanye West is angry and frustrated. For her part Kim Kardashian thinks she is a more important celeb than her husband and therefore no longer needs him. What’s love got to do with it anyway, we’re talking about a Kardashian here. Divorce rumors don’t begin in a vacuum and everyone who is paying attention can see the Kimye marriage trouble boiling over into a formal separation soon.

Kanye West has officially killed any street or fashion credibility he ever had. Radar Online reports that Kanye is actually planning to design high-fashion clothing for the Kardashian Kids clothing line. As if “high fashion” could be used in the same sentence with any of the Kardashian clothing lines…

Kanye West has high hopes that his idea for high-fashion clothing for babies and young children is the next big thing. Perhaps he doesn’t realize that babies grow rather quickly, and that most folks don’t have the money he and his wife Kim Kardashian have to spend thousands on an outfit that their baby will spit-up on, poop on, and grow out of in about two weeks. So, likely the Kardashians will be the only ones buying anything from the line…much like their other “kollections.”

So, while Kanye Kardashian, baby-clothing designer, says goodbye to the last shred of street cred he had, he may have also said goodbye to happiness judging from the recent pics of he and wife Kim and daughter North in New York on Sunday night. The family met up for a quick dinner and all looked completely miserable before and after their meal.

Naughty Gossip may have uncovered the reason for Kim’s bad mood after reporting that the 34-year-old she writes at a fourth grade level. And now that her mom Kris Jenner shared an email written by Kim publically, everyone knows of her arrested development.

There are many possibilities for the look of anger on their faces. As the holidays approach and speculation grows about the couple divorcing, things are very tense right now. Kris has told Kim she’s furious that Kanye is trying to take the family away from her by diving them up over the holidays. Kanye West is furious because Kim Kardashian can’t do anything without her family’s involvement and Kris Jenner’s approval. Expect a big blow up soon, because Kim is over all of this… including Kanye!