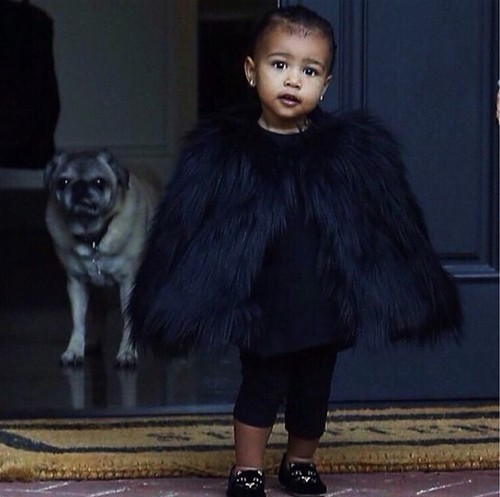 Kanye West and Kim Kardashian rumors are still  on a divorce track for the couple, but Kanye is trying his best to make amends to his wife and his daughter, North West. According to reports, Kanye has decided to buy a Christmas $62,000 diamond-encrusted tiara for North West, because nothing says sorry like your father buying his daughter an expensive new toy to play with. Seriously though, I wouldn’t be surprised if this was some elaborate guilt-trip by Kanye to keep Kim and North from leaving him – or perhaps he’s planning to use this in court if custody becomes an issue. ‘I bought her a $62,000 diamond tiara! What did you get her?!’

Oh, but it’s not just Nori that Kanye has been lavishing with expensive gifts. Sure, nothing matches a $62,000 diamond tiara Christmas gift, but Kanye has reportedly gone wild buying Kim gifts. A source tells the Daily Mail, “For Kim, he’s got specially commissioned designer clothes, shoes, bags, and jewels, too. Well, actually he asked his stylist to do it.”

Hah! Kanye West can’t even hand-pick his gifts to his own WIFE! This is how much he cares – he can’t even be bothered to go and select a few expensive pieces of clothing to give to his wife as an apology for abandoning her and their daughter so much in the recent weeks. He ruined their Thanksgiving, he’s preventing them from spending time with their extended family, he’s leaving them during important holidays to spend time with his buddies, and he can’t even force himself to select his own apology presents. Seriously, how long is this marriage going to last?

No wonder Kim Kardashian is holding steady on the divorce option – something I actually commend her for. Nobody involved in this situation thinks this marriage is going to last, and it’s only a matter of time before either Kanye or Kim breaks completely.

What do you guys think? Will Kanye and Kim get a divorce within the next year, or will they soldier on for another few years? Let us know your thoughts in the comments below.