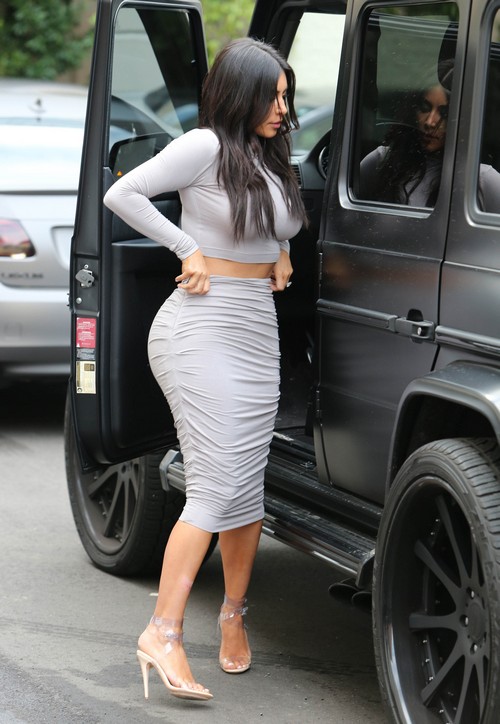 Kim Kardashian is taking no chances with Kanye West leaving for the holidays and sparking divorce rumors – she forced hubby to take fake family Christmas photos! Kim Kardashian knows a thing or two about trickery. She can turn a horrible picture into magic, can hide cellulite with some super strong Spanx, can carefully crop her daughter North out of pics, and can make followers believe she is at her sister Khloe Kardashian’s for Thanksgiving just because she describes the meal to be served. So, we really shouldn’t be too surprised about the plan she presented to husband Kanye West to ensure the couple is not adding fuel to the divorce fire by spending the holidays apart.

Kim Kardashian presented the idea she concocted with mom Kris Jenner to Kanye West when they briefly met for dinner in New York recently. The couple has barely been together the last few months and that won’t change. Aside from spending about ten minutes of family time together at Disney on Ice, the couple did share something special earlier in the day… their Christmas celebration! Kim and Kanye have been the subject of major divorce rumblings for months, and Kim had just the plan to kill any speculation of a possible breakup when the couple are not together over the holidays. Kim and Kanye spent Thanksgiving apart and set rumors ablaze that a divorce was imminent. Kim and Kris went into crisis mode to ensure fans would see Kanye, Kim, and North enjoying their Christmas together.

So, while certain silly media outlets rely on the word of celeb reps, CDLers know that reps are notorious spin doctors that make celeb lives appear to be the epitome of happiness. CDLers know we cannot rely on reps for the truth! So when those outlets report that Kim and Kanye’s reps have confirmed the couple will be together for the holidays, maybe they just don’t know the whole story. Kim and Kanye took fake Christmas family pictures around the tree, opening gifts, and looking very much into the spirit of the holidays, weeks before Christmas so that Kim could post the pics on Christmas to give her followers the impression that the happy family is together for the joyous celebration. Crisis averted! Too bad the crisis team cannot stay ahead of savvy CDLers, so we’ll know the truth when the fake Christmas family photos surface.

The Kardashian-Jenner clan has created an over-the-top holiday card every year for years, but failed to create a card this year. Everyone is fighting, tensions are high, and everyone is doing their own thing—happy to be away from one another. The family pretended to be together for Thanksgiving, yet not one picture of the family together surfaced. In fact, the only photos were taken by Khloe showing her set dinner table and prepared food. Now, since when has there been a Kardashian-Jenner event that was not memorialized with group selfies, bathroom backside shots, and duck-lips kisses for the camera? NEVER. Judge for yourself, but we know CDLers can spot this trickery a mile away and we’ll all be on alert for the Kim and Kanye family photos taken weeks before the holiday!

What do you think CDLers? Do you buy for a minute that these two will happily spend the holidays together?