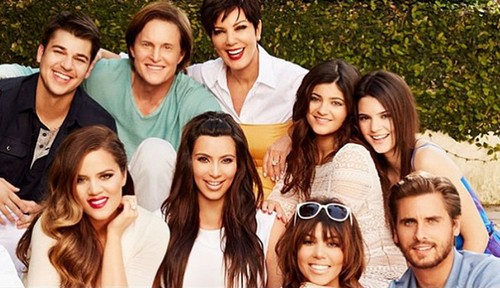 Looks like the writing is on the wall, or at least on Instagram! Kris Jenner could not have been more blatant about how she feels about daughter Kim Kardashian’s marriage to Kanye West, and the divorce we all expect soon – and she let the world know about today in one of her oh-so-subtle Instagram posts.

Kris and Kanye play nice in public and around family, but deep down neither of them like one another very much because they are both control freaks and are constantly battling over control of Kim’s career. Now that Kim has shared with Kris her desire to divorce Kanye, Kris has been posting cryptic messages via Twitter to gauge fan feedback if Kim and Kanye were to divorce. CDL told you about Kim Kardashian’s visit to divorce lawyer Laura Wasser’s office, and of the recent problems in the marriage. Kris took it up a notch now by posting a family picture in honor of Thanksgiving that did not include Kanye…in fact there was no mention of him at all. Granted, Kris did use a photo from before Kim and Kanye were married, but  any mother-in-law who claims to care so much for her son-in-law would never neglect to include him in a photo.

Seriously….does anyone really think the Kardashian-Jenner clan had such a shortage of family photos that Kris Jenner was forced to select one from the past that didn’t include her daughter’s husband? Even Scott Disick is in the photo with love Kourtney Kardashian. Many commented on the fact that Kris deliberately cut Lamar Odom out of the photo, but quite honestly, Kanye West is the one to be miffed. Lamar has moved on and no longer with Kris’ daughter Khloe Kardashian, but Kanye is currently married to daughter Kim.

This was not only a test on Kris’ part to gain an idea of how fans would react to a split between Kim and Kanye, it was also a slap in the face and a completely disrespectful thing to do to Kanye. She is basically telling Kanye, and her almost 5 million followers, that he is “not” part of the family. Along with the picture of her five daughters, son, estranged hubby and daughter’s boyfriend, the caption read, “Happy Thanksgiving everyone!!! I am so Thankful for my amazing beautiful family and give thanks every single day…..have an amazing day