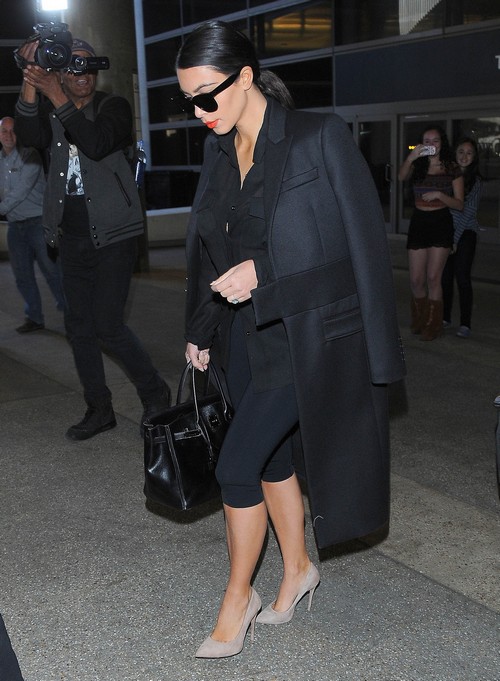 Kim Kardashian and Kanye West’s divorce is coming and Kim’s nasty Thanksgiving Twitter message implicitly excluding Kanye from her family while he was with his boyfriends in Paris shows the marriage is on it’s last legs. Most people are with family on Thanksgiving, or they make an attempt to be with family or loved ones. Not the case with Kim Kardashian and Kanye West, however, as the couple adds more fuel to the divorce rumors circulating. Not only do these two have the money and means to be together, but they are certainly able to manipulate their schedules so that they are able to make the time to share the family holiday with one another.

In fact, not only were the two apart for Thanksgiving, Kim made it very clear that Kanye is the outsider now as she quietly makes plans for a future without the rapper. Kim and North were at Khloe’s while Kanye was in his favorite place…Paris. Kim tweeted, “Happy Thanksgiving! I’m so thankful to have spent the day with my whole family over at Khloe’s house today! Khloe cooked so much yummy food!” Notice the words “whole family” in that post? No mention of her missing hubby, then a very clear point made about who Kim considers her family. I guess that whole Kanye/daughter/marriage thing doesn’t constitute a “family” in Kim’s eyes. Kim knew she was sending a very clear message to fans when sending that tweet.

It wasn’t just Kim who made the decision to be apart. Kanye has been complaining about Kris nonstop to Kim and she cannot take much more. He criticizes Kim for still letting Kris Jenner run the show, claiming she has too much power. Kim needs Kris in her corner, however, because Kris will help with damage control after the divorce. Kanye wasn’t too excited about being with Kris and the family, so he went to his favorite retreat—Paris—to be with friends. No concert, no paid obligation. He was eating dinner in a restaurant with friends in Paris on Thanksgiving. Of course, if the couple has the means to fly to one another to be together if they’d have wanted to, but that simply was not the case. Kim didn’t want to be in Paris and was not willing to budge. Kanye, on the other hand, purposely fled to Paris after learning of Kim kardashian’s dalliances in Dubai after being caught with Tyrese Gibson. He didn’t want to be around and insisted he wanted some space. Though he though Kim may follow, she opted to stay with her “whole family.”

While the “friends” Kanye shared the special holiday with have not been disclosed, many believe one guest in attendance was Kanye’s reported secret lover, designer Riccardo Tisci. Kanye has long battled rumors of being gay and having had a sexual relationship with Tisci. The fact that the two wore matching shirts to Tisci’s recent 40th birthday party, may be another telling sign that the two are a little too close for comfort. How many heterosexual men do you know who plan to wear matching shirts to a birthday party? A little odd.

After the Kim and Tyrese encounter, Kanye West and Kim Kardashian each talking to their exes,  Kim’s visit to divorce attorney Laura Wasser, and now spending Thanksgiving apart—it is only a matter of time before these two split for good.

What do you think about the couple spending time apart of Thanksgiving? How about the tweet from Kim, intentionally leaving Kanye out? Tell us below!

Kim Kardashian by FameFlynet – Kim doesn’t look happy returning alone from Dubai – where is her husband, are the couple already separated – Kim and Kanye haven’t been together in weeks?