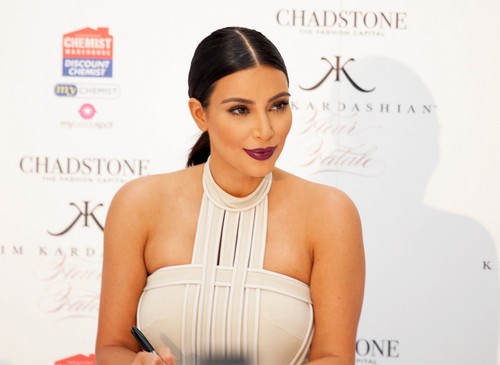 Was Kim Kardashian was caught cheating on soon-to-be-divorced husband Kanye West with Tyrese Gibson in a Dubai nightclub? In fact, given the stricter code of public conduct between men and women applied in Islamic Dubai, Tyrese was asked to leave the club for flirting  with married Kim! Kanye West should know better than to let his naked-loving wife out of his sight, especially when she is travelling in Dubai and sexy Tyrese is around! But that is JUST what happened and a source blabbed to Media Take Out that Tyrese and Kim Kardashian were in a Dubai nightclub together when Tyrese was kicked out after a man who was with Kim in the club complained about something that was going down between Kim and Tyrese that he didn’t like.

Tyrese was asked to leave, and he complied—likely not wanting to cause any problems because, of course, they don’t mess around in Dubai and Kanye may be just as dangerous. The couple has been trying to battle divorce rumors, but there is mounting evidence that keeps growing to prove that their “happy” union is just no so.

CDL confirmed Kim is, in fact, in Dubai right now promoting her new perfume and was also enjoying some girl time with Michelle Rodriguez and a few others on a yacht. Kim likely shared that part of her trip with Kanye, but may have forgotten to mention the fact that she was spending some “quality” time with Tyrese as well. To Kim, being with Tyrese is like striking gold. She was always attracted to him and thinks he is very sexy. She likes that he is successful but not over the top. She knows women swoon over him, whereas hubby Kanye is not really known as a ladies’ man. Kim is all about the challenge and would love to score the guy that women everywhere fall all over.

We can’t wait to hear how Kim talks her way out of this one! She better get some acting tips from Tyrese, as this is not one of those scripted episodes of her life!
Wow…what do you think about this hot gossip CDLers?? How do you think Kanye will react? Tell us below!