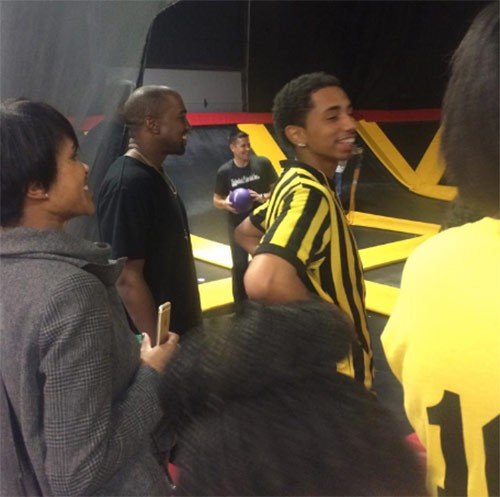 Kim Kardashian and Kanye West’s marriage is in trouble and a divorce is very possible. Kanye West snuck back into the US for a family event to which Kim Kardashian and North West were not invited nor welcome to attend – divorce could be coming! It was no sooner that Kanye West jetted off to Paris, leaving his wife Kim Kardashian and Daughter Nori in the dust, that he came back to the US to attend a family event… alone! In Wilmington, Delaware for a family celebration on Saturday, Kanye West likely didn’t count on having to be concerned about paparazzi or eyebrows being raised (besides Kylie’s, which are permanently raised) over attending a family event without his own family, but of course CDL would find out about the trip. Thanks to a Philadelphia, PA Action News viewer, there is photographic proof of Kanye at the event (see photo above).

Kanye West and Kim Kardashian have been battling divorce rumors for some time, both attending more and more events alone. This event, however, was a family celebration and Kanye was spotted having a great time without his wife and daughter as he made the trip back from Paris to attend a birthday party for one of his relatives. Kanye had a blast at the Stratosphere Trampoline Park with his family members, and didn’t seem to have a care in the world. Oddly enough, Kanye darted off to Paris, once again, after briefly meeting with his wife in New York after the two attended various events separately. CDL told you that the two met to discuss their plan for the holidays. The subject has been a source of contention with the couple, and pics of the two exiting their brief dinner date, confirm just that.

Almost immediately after the dinner date, Kanye chose to leave to Paris, instead of opting to stay in the US a couple extra days in anticipation of his family party. He came back strictly for the party and enjoyed time with his family, with Kim and North West nowhere to be seen. This is clearly a couple on the way to divorce as it is over one month that couple haven’t been together for more than a few hours, once! Now that the two are not even attending family celebrations together, it seems the writing is on the wall. Stick with us CDLers…you know we will have all the latest updates for you!

So what do you think? Does Kim and Nori’s absence say a lot about the state of their relationship or do you think this is no big deal? Regardless of the bilge written by rude outlets who fancy themselves self-appointed gossip police, our sources in the media and entertainment industry assure us that Kim and Kanye’s marriage is in REAL trouble.