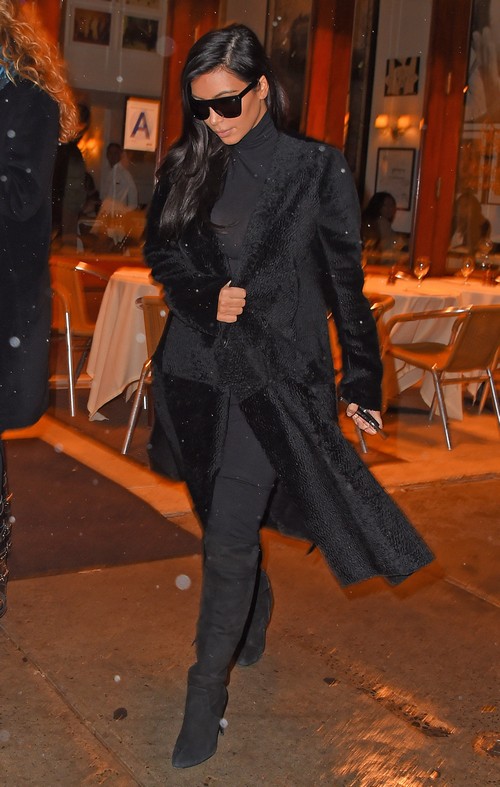 Kim Kardashian and Kanye West appear to be moving rapidly towards divorce as their discontent with their marriage and each other grows. There was a chill in New York City and it wasn’t just from the weather. Kanye West received a chilly reception from wife Kim Kardashian in New York after the oft-apart couple met up after both attended different events solo over the weekend.

Kim was partying in Miami with pal Jonathan Cheban at a party in her honor to celebrate her Paper magazine cover, while Kanye was busy supporting friend Chris Rock at a movie premiere in New York. Rather than Kanye making the trip to meet up with wifey in Miami, he had his mind made up—Kim should come to New York for the two to reunite after weeks of almost total separation. Kim begrudgingly made the flight but was poised and ready to give her hubby the cold shoulder after he chose to attend Rock’s movie premiere over her party. She was embarrassed that Kanye wasn’t there to support her, especially because everyone knew he was in New York at a movie premiere instead. Kim may not be in love with Kanye, but she is all about appearances and hates to look as though her man isn’t making her a priority.

Kanye had a tantrum over Kim not including her married name on the Paper cover and, just like his wife, is all about appearances. Kanye thought it was the epitome of disrespect to leave “West” off her last name on the cover and felt it made him look bad. After battling divorce rumors for several weeks, the couple met to discuss their itineraries for the next few weeks which will undoubtedly include how they will spend the holidays. As the Gossip Table confirms, the two are figuring out their Christmas holiday plans and it has not been easy sailing. As CDL reported, Kanye spent Thanksgiving in Paris while Kim was supposedly with Khloe. When only photos of food and a table setting at Khloe’s emerged, many wondered if the family even got together at all as there were no photos of the clan enjoying the holiday together. As we all know, the Kardashian-Jenner family are no strangers to pictures of them enjoying time together.

Kanye and Kim have different ideas of how to spend the holidays. Kanye wants to be in Paris and wants Kim and daughter North with him. He is not big on the holidays and doesn’t want to have to be with Kim’s bossy momager Kris Jenner and the gang. He still has a hard time celebrating holidays without his mom, who passed a few years ago after complications from cosmetic surgery.  Kim, however, is all about her family and wants to stay local and enjoy the time at home with North. Kim believes North is at an age where she will enjoy the holidays and being at her home with their tree and decorations. As happy as Kim would be to spend the holidays away from Kanye, she knows they must keep up appearances  to ensure they look like the happy family, and, she feels like he should not be selfish for once and stick around to be with North.

For now, Kim may have won this battle. Kanye is a little more open to staying after Kim through North in her plea for him to stay. Kanye is crazy about North and doesn’t want her to be without her father for the holidays. The two haven’t decided and the tension from their discussion was obvious as they exited Soho last night after an icy reunion.  Don’t expect things to get any better anytime soon as these two stubborn egomaniacs have one thing as a priority….themselves!

Where do you think the two will end up for the holidays? Will Kim give in and head to Paris with Kanye?  Tell us below!