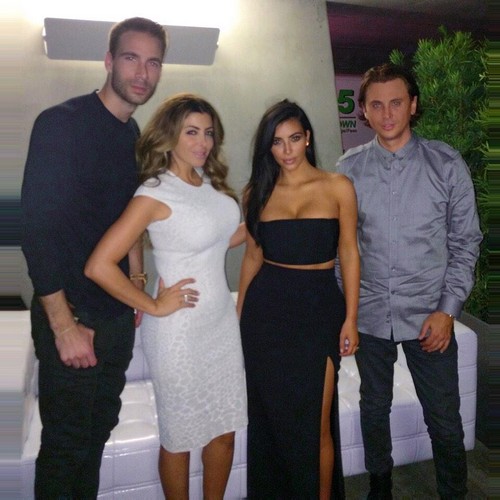 Kim Kardashian is furious after Kanye West skips her Art Basel VIP dinner party, preferring to hang with Chris Rock in NYC instead – divorce is coming! It’s almost a month now that Kim and Kanye have been separated – they have not been together in over 3 weeks! CDL told you that Kanye West was livid about wife Kim Kardashian not using her married name “West” on the cover of Paper magazine—the one where she attempted to “break the internet,” but really only managed to break some eyeballs—and he is defiantly skipping out on Art Basel in Miami as Kim’s Paper cover will be celebrated.

Proving there is some serious strife in their marriage and divorce is a possible outcome, Kanye not attending Art Basel this year is a bold statement that required not a single word. His presence was over the top last year and this type of event is right up Kanye’s wanna-be-sophisticated alley. Kanye was a force to be reckoned with at Art Basel last year—he was all over and even performed. This year, Kim travelled alone to Miami for the festivities and she couldn’t be happier about it. As Kim explores the Convention Center boasting a total of 267 galleries from 31 countries, she’ll be in good company.  From rich art enthusiasts, to international billionaires, to designers, artists, and musicians, tons of hot celebs and A-Listers are enjoying the many parties through December 7.

Tonight, however, is Kim’s very special night where her Paper cover will be celebrated with a VIP dinner party. But instead of her husband as her date, she took bestie Jonathan Cheban. Now THAT says a lot, folks. It says divorce! With Kim Kardashian and Kanye West fighting and having problems for months, and Kim trying to find a way out, the couple was already on a destructive path, but Kanye’s tantrum over Kim not including her married name on the Paper cover and, as a result, refusing to be a part of her special event was more than Kim wanted to take. Kim plans to live it up and flirt up a storm. She is sending Kanye a message that if he doesn’t want to be there to support her, she’ll find someone else who will. CDL told you about some naughty behavior between Kim and Tyrese Gibson while she was travelling along in Dubair to promote her perfume.

She has mentally checked out of the marriage and moved on already—but she is still hurt that Kanye didn’t even make an attempt to be there for her at the special dinner party. And though he couldn’t make the effort to support his wife’s event, he was on hand to support friend Chris Rock, writer, producer, and star of the movie “Top Five” in which one of his songs is featured. So, on December 3, Kanye was on the red carpet in New York to support his friend, but was unable to make it to Miami to support his wife. Are you with us, CDLers? The two couldn’t manage to be in the same place for Thanksgiving either.

After Kim’s big night tonight, we’ll see where she ends up and who she ends the night with. With Leonardo DiCaprio, Common, Usher, and many other hot single men, Kim is sure to do some serious flirting as a payback for Kanye missing her night. Of course, we’ll be on this for you loyal CDLers!

For now…give it your best guess. How many more months do these two have?