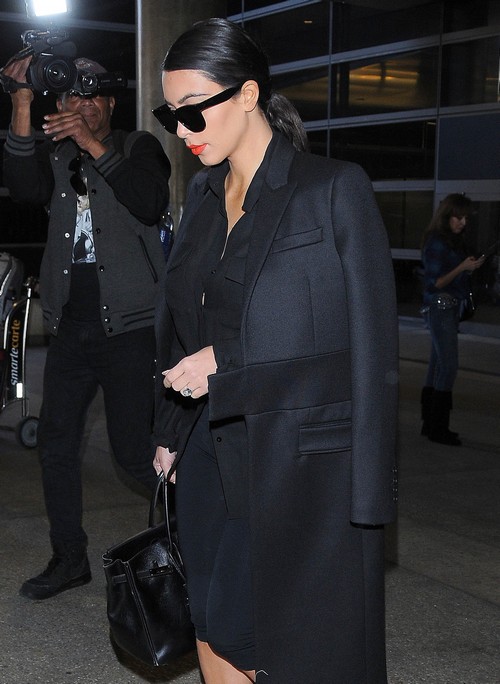 Kim Kardashian insists on remaining in America while Kanye West wants to move to Paris – we expect a divorce and custody battle as a consequence. Hal Carmichael shared a little insight about his famous step-sibling. Hal says Kanye is controlling with his wife Kim Kardashian, but it is only because if his fear of losing her as he lost his mother. Kanye never got over his mother Donda’s death after she died of complications from liposuction.

Hal shares that the safety of both Kim and daughter North West is Kanye’s biggest concern, Radar Online reports. Because of his fear of North being kidnapped, he has been talking more and more about moving to France. While Hal shares that both Kanye and Kim want to be “The” power couple, Kanye would be totally fine living life out of the spotlight. He understands, however, that Kim’s career depends on being in the spotlight and she refuses to give up any part of that.

The couple has been battling over Kanye West’s desire to move his family to France. Kim Kardashian has drawn a line in the sand and is not willing to budge despite her husband’s controlling ways. The battle over where to spend most of their time has caused marital problems for months, and Kim plans to make Kanye the bad guy when she divorces him. Kim has been plotting her escape for months, but doesn’t want to seem flaky by initiating her third divorce. So she is staying strong about staying in Los Angeles, and is hoping Kanye heads to Paris so she can be free of him without the drama. Kim has decided that she’ll hint that her split from Kanye was a result of him wanting to pluck her and daughter North from their home and force Kim to give up her career.

Kanye would be fine without Kim in Paris but is adamant that he wants North West with him. Kim figures that she’ll work out a good custody arrangement with Kanye, and is happy that he’ll be so far out of her hair. As CDL has been reporting, a divorce will be coming soon, and Kim is going to use the very thing that Kanye’s stepbrother spoke about…his controlling ways….against him so that it appears he left her and North to move to Paris. Stay tuned, CDLers…this is not even close to being over yet!