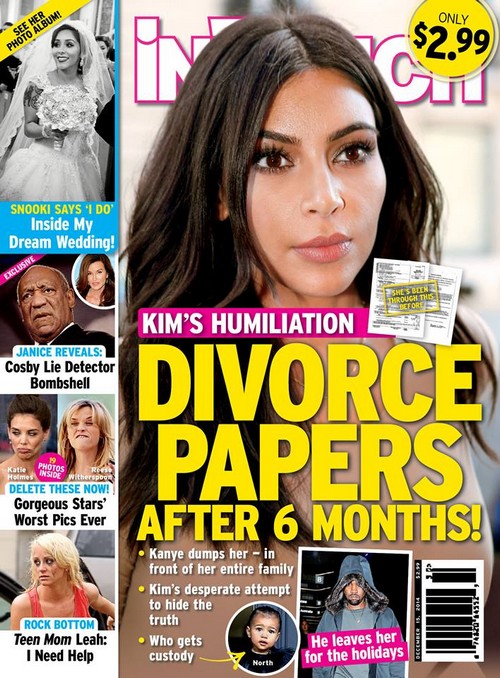 Reality star Kim Kardashian is featured on the front cover of the latest issue of “In Touch Weekly” and according to the magazine’s report, she and rapper Kanye West are gearing up for a nasty divorce.

Kim and Kanye have only been married for six months and he has already thrown in the towel on their marriage. In fact, the magazine claims that he has dumped her in such a grand fashion that her entire family witnessed the dumping. Oh snap!

Inside of this issue, “In Touch” claims that Kim was so angry that Kanye decided to spend Thanksgiving away from her and their daughter that she is having the paperwork drawn up as we speak. A source told the publication, “After just 188 days of marriage, Kim’s finally had enough of Kanye’s selfish ways. It was the last straw for her. She’s getting ready to file divorce papers.”

In fact, the reality star was already said to have visited a “high-powered L.A. divorce lawyer” in November. Now that they have gone their separate ways, they are busy fighting it out over custody of their daughter North. In addition, Kim’s camp is calling out Kanye for being way too “controlling”. He was reportedly way too frustrated with the importance that Kim has placed on her reality television career and that drove Kanye a bit nuts.

He should have taken issue with the fact that Kim loves to show off her butt to everyone on the planet, but that story didn’t seem to make the cut in the magazine. Either way, it boils down to them splitting up and the ensuing custody battle over Nori and all of the magazine covers full of nonsense that will generate.

I don’t know about you, but we are getting the popcorn ready because it’s going to get bumpy for these two rather quickly. I guess those plans for a second baby have been tossed out of the window!