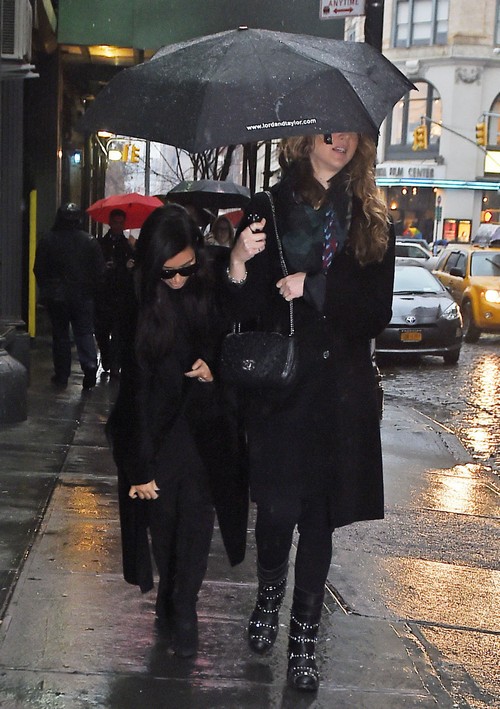 Kim Kardashian and Kanye West divorce rumors are all over the Internet lately and there hasn’t been anything we’ve seen to quell them. Kim was in NYC Saturday night, Dec. 6, after returning from Art Basel in Miami where as she did in Dubai Kim partied without Kanye. The couple haven’t seen each other for almost one month straight choosing to spend Thanksgiving apart, and we hear that Christmas together might NOT be happening either!

Kim Kardashian and Kanye West have their first Christmas coming up as a married couple with a child, so it’s a big deal for them… right? Maybe not so much. According to VH1’s Gossip Table, Kanye West wants to spend the holiday in Paris [no doubt with his boy toys], whereas Kim Kardashian wants to spend it in California with her entire family. And we know that Kanye being Kanye, he’ll probably win the argument and force Kim Kardashian and North West to spend the holidays with him in Paris. And what’s worse, he’ll abandon them in a hotel somewhere and go spend Christmas evening with his friends.

Don’t believe us? Well, that’s pretty much exactly what happened during Thanksgiving, even though that was their first Thanksgiving as a married couple with a young child. You tell me – what newlywed couple with a new baby is going to spend Thanksgiving apart? Especially when they’ve flown halfway across the world, and aren’t even with extended family? And the saddest thing about the whole thing is, no matter how much we dump on Kim, she does put up with this behavior with Kanye West. On the one hand, it’s not like she has a choice – Kanye West is king of Kanye West world, and there’s no bigger priority to him than his own desires. And if Kanye West wants to spend Christmas hanging with his boy toys in Paris, then damn it, he will spend Christmas hanging with his boy toys in Paris, Kim Kardashian be damned.

It may sound harsh, but that has been the dynamic of their entire marriage. Kim Kardashian will do something, Kanye West will get angry, Kanye will put his foot down, and Kim will meekly follow Kanye’s example for the next six months. It’s no wonder we’re hearing so many rumors about Kim seeking a divorce lawyer – at this rate, a Kim Kardashian and Kanye West divorce is not out of the picture.

Kim Kardashian and a friend brave the rain and go grab some dinner at Cipriani in New York City, New York on December 6, 2014. Kim had just returned from Miami where she partied hard [without Kanye West] during the Art Basel Festival. FameFlynet