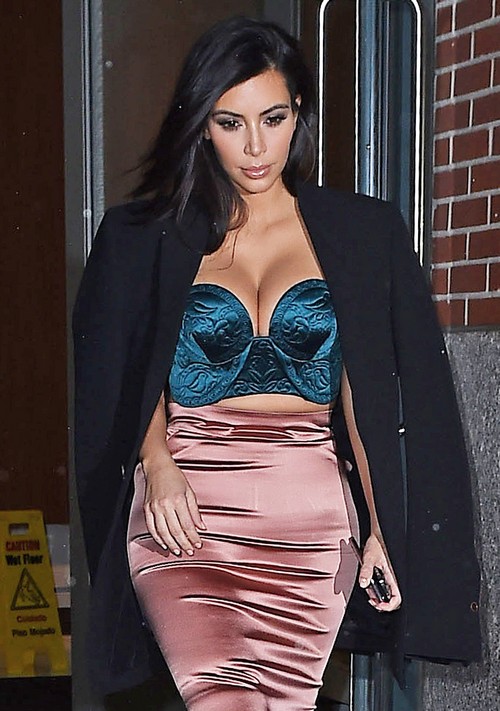 Kanye West refused to deny that he and Kim Kardashian are  getting divorced when explicitly asked that question by concerned reporters – Kanye didn’t comment on rumors of his de facto separation and split from Kim. This means the rapper did not deny that he and Kim are getting a divorce! Nothing in the couple’s troubled marriage indicates that they are happy together, or even that they in fact still are together.

And….he’s off! Just as quickly as he swooped in for a quick dinner date and divorce talk with wife Kim Kardashian in NYC on Sunday night, Kanye West is back off to Paris to spend time with his boyfriend and work on his album. CDL has been bringing you all the latest on the couple’s deteriorating relationship and now we can tell you that after the couple spent only a few miserable hours together on Sunday night trying to iron out their plans for dealing with the holidays, Kanye has once again ditched Kim and daughter North West and taken off to his favorite destination…Paris.

The couple has been battling divorce rumors for some time, and seems to keep fanning the flames by continually spending time apart and missing important moments and events together. Kanye West ditched his wife’s Art Basel party celebrating her Paper magazine cover to attend a friend’s movie premiere, and the two were apart on Thanksgiving—with Kim Kardashian remaining in LA with Nori, and Kanye in Paris dining with friends.

As Kanye was seen heading out of LAX on Monday, X17 Online reports that he simply flashed reporters the peace sign when asked if he was going to divorce Kim. We all know Kanye has to be on his best behavior with photogs, but the fact that he said nothing, says everything. Not one word from Kanye to the videographer to dispel rumors of marriage strife and possible divorce.

CDL has told you that both Kim and Kanye are over this union and only holding it together because of the KimYe brand. Kim is especially ready to get out, while Kanye is more complacent. He just ditches Kim and Nori when he feels like it, so he is in no rush to end things. Kim Kardashian, however, is ready to spread her wings and find true love—and she knows Kanye West is not the one. She’s been struggling to hold it together but momager Kris Jenner is making her stay strong until they can formulate their PR plan for handling the divorce.

It’s only a matter of time, CDLers. For now, tell us your take on Kanye’s reaction to divorce questions.