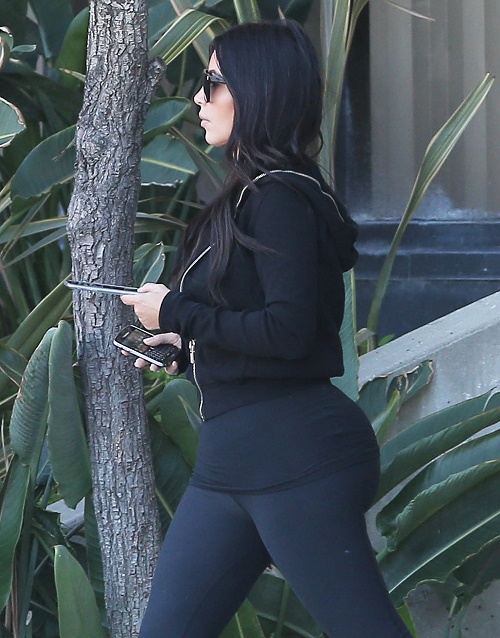 With Kanye West and Kim Kardashian divorce rumors running rampant, now probably isn’t the best time for Kim Kardashian to get caught up on a cheating scandal. Sources have been reporting to various sites for over a year now that Kim Kardashian has two cell phones – and a secret number that Kanye West is totally unaware of. Being the controlling hubby that he is, Kanye checks Kim’s cell phone on a regular basis to make sure she isn’t talking to any other men. Kim’s solution? Get a secret phone to talk to other men and hide it from Kanye – seems pretty genius, except she just got caught.

Kim was photographed by the paparazzi carting around two cell phones, and Media Take Out has posted the photos and exposed the Keeping Up With The Kardashians star. Now, normally we would give someone the benefit of the doubt – hey maybe she was just in the process of switching phones? But, come on, with all of the divorce rumors that are swirling around and the fact that multiple sources have reported that Kim has a secret phone that she hides from Kanye – it seems pretty obvious.

If anyone knows how to cheat on their husband and live a double life, it’s Kim Kardashian. After all, she used to secretly talk to Kanye behind Kris Humphries’ back during their 90-second marriage, and history does have a sneaky way of repeating itself. Hey, maybe the reason Kanye and Kim are getting divorced is because he caught her with her second phone. What do you think Kim uses her secret second phone for? Who do you think she is talking to behind her husband Kanye’s back? Let us know what you think in the comment section below!