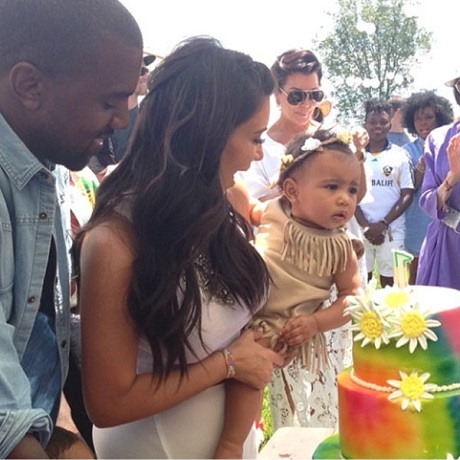 Have you guys taken a really good look at the photos that pop up online of Kim Kardashian and her year old daughter, North West? They say that a person’s body language tells the real story of how they feel and if that’s the case then little Nori sure can’t stand being handled by her own mother. In nearly every photo, the kid has a scowl on her face and rather than hanging onto her mom (as most babies will instinctively do) she is usually trying to push away from her. The child doesn’t even wrap her legs around Kim half the time; instead, she ends up looking like she is dangling from her arms.

Kim has hardly proven herself to be new mom of the year either. The moments when we do catch a glimpse of Kim with her daughter are clearly intended to be staged paparazzi photo ops with Nori being dressed to match as if she’s a living accessory intended to accentuate her outfit. I don’t want to say that there’s no love here but clearly these two have yet to bond and that’s not too surprising. Kim seems pretty incapable of forming any solid connections — it’s like she doesn’t know how to dig deep enough to be real for more than an accidental second or two and there’s just no way that she can put all of her fakeness aside for a messy baby, even if she did give birth to it.

Baby daddy Kanye West demands the best of everything and at this point I hope that these two clowns have an incredible team of nannies taking care of their daughter because she needs someone to be a safety net for her. Do you think that Nori prefers spending time with the hired help over being paraded around