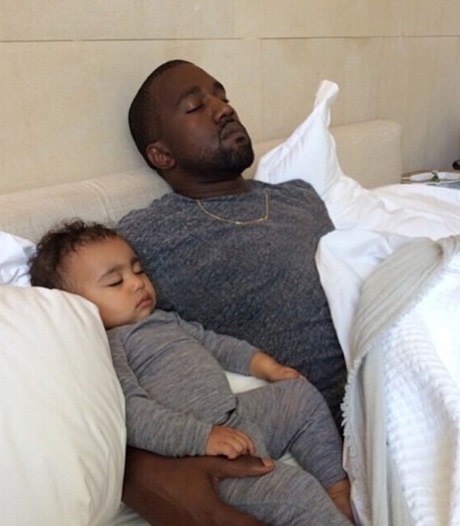 Kim Kardashian and Kanye West will do anything to protect their public image, probably because they don’t realize that it’s already in the dumps. Kanye remains delusional about Kim’s popularity with the people, and he doesn’t quite seem to realize that people don’t have the best impression of him for marrying her, either. And what’s worse, both Kanye and Kim often prioritize their careers [and by Kim’s career, I mean famewhoring] above spending time with North West.

Sorry, did I say careers? I meant vacation. Kim and Kanye often abandon North for the most mundane reasons, including extended honeymoons and stay-vacations. Forget the fact that they could easily bring along the baby and a nanny [a la the royals]. No, they’d much rather leave North with her nanny back at home, and not have to deal with the fact that they HAVE A CHILD.

Most parents spend as much time as possible with their babies, especially when they’re that young. If they don’t, it’s usually because they have a good reason, such as working to bring home enough money for the family. But Kanye and Kim already have enough money to last them a few lifetimes, but instead of spending their free time with their baby girl, they’d rather go gallivanting across Europe.

It’s pathetic, it really is. And of course, the criticism over their constant abandonment of North has no doubt reached their ears. So what’s their solution? Well, posting pictures of North online, of course! What else would the queen of modern-day social media famewhoring do? Kim posted a picture of Kanye and North sleeping after North’s 1st birthday, captioning the photo, “This is what life is about! Our baby girl turned 1 today! We played so hard they passed out while we were watching the game!”

Right, ‘this is what life is about’ only when they need it to be about this. The rest of the time, they conveniently seem to forget the fact that they have a baby waiting for them at home.