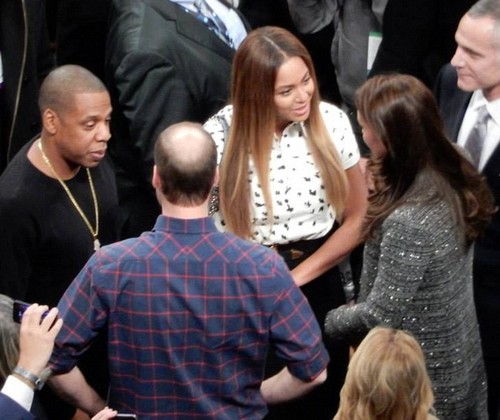 Kate Middleton and Prince William were pictured at the NBA game gleefully chatting with Beyonce and Jay-Z, and Kim Kardashian was mad with jealousy over it! While Kim Kardashian is busy tweeting bathroom selfies and warning fans about sisters Khloe and Kourtney Kardashian being added to the app in her name, her nemesis Beyonce was holding court in New York, hobnobbing with the royals at the Nets/Cavaliers game.

Kim has long been trying to wiggle her way into the company of the Duchess, but has had no luck thus far. In fact, it wasn’t long ago that Kim was sending Kate clothing from the trashy Kardashian Kollection in hopes she’d be pictured wearing something from Kim’s line. That was some serious dreaming on Kim’s part as Kate made it clear that she’d rather be dead than sport tight cheetah-print miniskirts. Kim has yet to befriend Kate but hasn’t given up on her dream at this point.

After tonight, however, she may need to step up her game because the other royal couple, who she has long attempted to become close to, was in the presence of Kate and Wills. Kim tried so hard to become besties with Beyonce. She thought it would be a natural thing since her hubby Kanye West was so close the Bey’s hubby Jay-Z, but they never bonded because Beyonce wanted nothing to do with her. So when Kim saw pics of the royal couple with Beyonce and Jay Z, the trash talking began. Kim was livid thinking of Beyonce basking in the glory of another big win. Kim was never close to Beyonce, but after she and Jay-Z skipped her wedding to Kanye, Kim said she never wanted to have anything to do with Bey again. I don’t think Beyonce’s crying over it.

To add insult to injury, brilliant New York Post senior features writer and editor Dana Schuster says of Duchess Kate Middleton, “She is the antithesis of Kim Kardashian which is really refreshing nowadays. We witnessed Will and Kate’s ups and downs, we know they broke up, we know about her morning sickness but there’s still a lot of mystique left and we’re not sick of her yet.” Ouch. And though that may hurt Kim’s feelings a bit, she’s far more upset and Beyonce being seen with Kate—she thinks it should have been her and Kanye chatting it up with the royals.

Hey…maybe Kim Kardashian can add Duchess Kate to her app as well, and the two can be besties who work together to battle the evil Beyonce virus that has taken over the town!