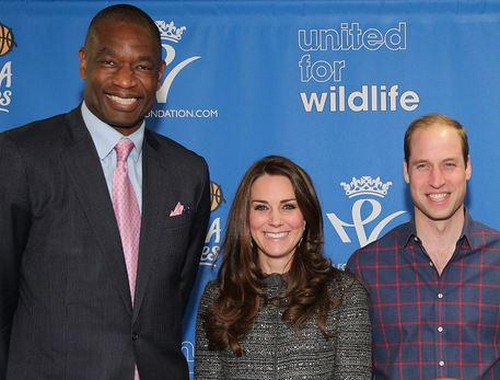 Kate Middleton and Prince William met with Beyonce, Jay-Z and LeBron James tonight, Dec. 8, in NYC and there are plenty of photos and videos to record the historic event. New Yorkers rejoiced after Duchess Kate Middleton and Prince William landed in their hometown and created quite a buzz with their very busy day. Kate Middleton visited an East Harlem school and was given a bouquet of flowers by the very charmed students. In true form, Kate got on her knees to help kids decorate picture frames with stickers. While Kate was described as a “typical New Yorker” who was very down-to-earth at the elementary school, husband Prince William was in Washington DC to meet with President Obama and speak at a wildlife conservation meeting before meeting up with his wife in New York to catch a game at Barclays Center in Brooklyn where they planned to watch the Nets and the Cleveland Cavaliers.

LeBron James had said it was a huge honor to be able to take the court in front of the royals. In anticipation of the royal visit, the New York Post quoted James as saying, “The stuff that you read about, people like them, only in books, and to hear that they’re coming to town to see me play, they want to see me do what I do best, it’s a huge honor.” Cavaliers guard Kyrie Irving said, “It will be great to see them in person. I mean, for me, seeing celebrities in person is awesome. I don’t really know too much about them, but they’re celebrities in our world so I guess it’s great to see them,” reports Espn.

Indeed it was a royal event. Beyonce and Jay-Z happened to be at the game as well and had the unique opportunity to visit with The Duchess of Cambridge and Prince William. Pictures of the foursome happily engaging are making their rounds. The royal couple are headed to visit the National September 11 Memorial and Museum on Tuesday.