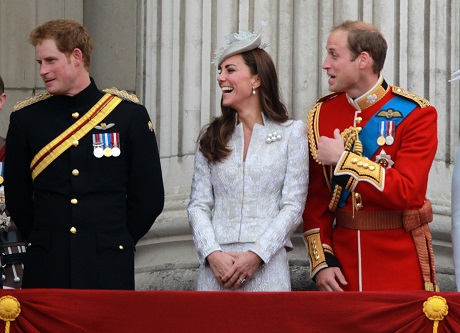 Kate Middleton and Prince William seemed intent on creating a new image for the royals when they first got married and had Prince George, as a family that would take care of their own work and not rely on an army of maids and butlers to help them. And I’ll give them credit — they kept up the charade for a good few years, but it’s about to come tumbling down with this latest bit of news.

Apparently, Kate and Will are utilizing a personal staff of twelve people, and that’s not including their cooks. Twelve people! What do they need twelve people for? They barely even work, and when they’re not making their public appearances [which get rarer and rarer by the year], they’re supposedly at home, spending time with George. In what reality does that require twelve people’s help?

According to the Daily Mail, this group of twelve includes someone from the Armed Services to ‘manage their affairs‘, two press officers, a nanny, a corporal [who will take care of chauffeuring, logistics, and William’s wardrobe management], and an Italian housekeeper. Katie Nicholl at Vanity Fair estimates that Kate’s and Will’s private staff numbers up to 12, and that also includes Kate’s two additional female aids that reportedly help with getting Kate Middleton her clothes and writing letters. Um… why does Kate need two people to help her write letters and pick out her clothes? Is that such a time-consuming job, writing letters?

To be fair, I really don’t know what it’s like being a royal. Maybe Kate spends most of her day holed up in her office, writing letter after letter. Maybe it takes weeks to select outfits for her public appearances [although that, I can believe]. Still, doesn’t 12 seem excessive, especially with Will’s and Kate’s insistence that they’re a modern family that’s leading a normal life? I guarantee, most families in England do not have a staff of 12 catering to their every whim.